The best way I know to combat bigotry is to shine a spotlight on it. I was at the debate on Civil Partnerships at Queensland Parliament House this week (30/11/2011).  Several of the comments had me holding my hand to my mouth in horror.  Many had me laughing they were so outrageous.

Politicians’ bigotry should not be hidden away in Hansard where few people will read it.  It should be out in the open and freely circulating so that voters can find it easily when searching for information on their local candidates.

Perhaps the worst speech of the night came from Chris Foley, member for Maryborough.  There were others and you can read them on Hansard.

Margaret Keech, member for Albert, gave a particularly cloying defence of bigotry in which she managed to insult just about everyone by drawing an analogy between the strength of Christians’ ownership of traditional marriage and the strength of Aborigines’ commitment to the land. Ms Keech’s decision to vote against the bill was particularly odious in view of the fact she, reportedly, has a gay son.

But, let us move on to Mr Chris Foley, the Independent MP for Maryborough.

Mr Foley began with the all too familiar ‘some of my best friends are gay/black/jewish’ canard which is inevitably followed by a stream of homophobic/racist nonsense. He didn’t waver from the formula.

“I have a number of gay friends who I see regularly—” said Foley.

This brought a predictable groan from both his fellow MPS and from the gallery.

“Two of our lifelong friends are a young lesbian couple who have just had a baby. We visited them in hospital and wished them well with their baby.”

But Foley doesn’t think his friends’ baby should have the protection of parents with a legally recognised partnership.

He continued (though he really shouldn’t have):

“The first time I met one of my best friends who comes to visit me regularly in parliament was in a former life when I was a full-time piano bar singer. He tried to pick me up. He would be one of the gayest people I have ever met in my life. I will never forget the first time he came in. He had the handbag, the lipstick and everything going on—”

There was a collective gasp from the floor and the gallery.  The gayest person he had ever met in his life????  I think that’s when my hand involuntarily flew up to my mouth.

There was such outrage at this remark the speaker had to call for order.

Yet, Foley blundered on:

Yes, Mr Foley, so you suggest that all those damned homosexuals up in the public gallery should just ‘change their minds’ and marry someone of the opposite sex instead?  Did it ever occur to you that this ‘friend’ (if he exists) is bisexual? Or homosexual and repressing his sexuality?  There are many homosexuals in the community who are, or who have been married with children.  That doesn’t make them straight, Mr Foley.  Nor does it make them happy, whole, or psychologically well adjusted. Note that Foley doesn’t mention his friend is ‘happily‘ married.

Next, Foley launched artlessly into the ‘slippery slope’ argument:

“Where do you stop when you change the time-honoured principle of the way relationships have always been? How do we then say polygamy is wrong when someone has more than one wife? How do we then say polyandry—where a woman chooses to have more than one husband—is not an appropriate relationship? How do we say polyamory—where there are multiple relationships—is wrong? There has been lobbying from all sides on the issue. I must admit that I had to reach for a dictionary when some of these terms were presented to me during the hearing.

It is my contention that one of the dangers of this bill at law is that, once you start to move away from traditional marriage relationships, you set yourself adrift on a sea without an anchor and anything goes. We start to push the boundaries a little towards people having all sorts of totally strange ideas.”

And, of course, having used all the usual cliches, Foley brings it home by casting Christians as the true victims in the debate:

“When I look at this argument I am very concerned that Christians are often portrayed as being hateful or spiteful towards gay people in particular. I just do not see that to be true in the Christians that I know. They have nothing but love and grace towards people regardless of their orientation. In some respects I believe that this has become an ipso facto referendum on whether Christianity is some sort of bigoted and uncaring religion. “

Yes, Mr Foley.  The Christians opposing civil unions and same-sex marriage are so loving and caring they ignore the evidence that homosexuality is not chosen and cannot be changed.  They ignore the evidence that psychological distress and suicide attempts are astronomically higher in the gay community than the general population. They close their ears to expert opinion that this is linked to discrimination against the gay community. Gay teenagers are killing themselves, but the good Christians think it is more important that their sensibilities about marriage are preserved.

And why would a gay teen kill themselves? Because Christians, Mr Foley, are telling them they are less than equal, not normal, and sinful in the eyes of God. Because Christians, Mr Foley are telling them they can change (when they know they cannot). Christians equate homosexuality with pedophilia and bestiality when what most homosexuals want is simply a loving, monogamous relationship with a consenting adult partner – the same as the rest of us. And then Christians tut-tut and shake their heads when gay teens are bullied at school – completely denying the fact that it is their attitudes which precipitate such behaviour.

Christians are telling gay teens the only way they can have a ‘normal’ family life is to deny their sexuality and marry someone of the opposite sex – ruining not only their life, but, potentially, that of their spouse and any children of that misgotten union. And if they choose not to marry, Mr Foley, your good Christian friends tell them, “That’s okay, providing you never have an intimate sexual relationship or have children.”  How would you have felt, Mr Foley, if you had been told that as a vulnerable teenager?

What’s more these bigoted, homophobic Christians even ignore the fact that other Christians, reading from the same holy book, following the same Christ and worshipping the same god find no problems whatsoever with civil unions or same-sex marriage.  It never occurs to them for one moment that there might be a kinder, more humane way of looking at things – they are too preoccupied shoring up their own prejudice.

But none of that figures on Mr Foley’s radar.  He concludes:

“As a matter of conscience I cannot support the legislation, but I do so with a struggle in my heart and I wish no ill feeling towards people who share a different point of view.”

And my response? My fat arse you don’t, Mr Foley!

The people of Maryborough should be shocked and embarrassed to have a representative who apparently did no research whatsoever into homosexuality before voting on the bill.  Instead,  Foley based his decision on his own ignorance and bigotry and then had the unmitigated hide to display that ignorance proudly ‘for the record’. 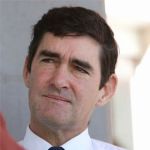 Let us pause for a moment and contrast Foley’s stance with that of my local MP, Peter Wellington.  Mr Wellington is no screaming lefty.  He was once a member of the National Party, now an independent. He is also a Christian. This is how someone who has done the research and approached the question openly and honestly viewed the question of civil unions:

Mr Wellington began by reading some correspondence, for and against the bill, from members of his constituency.  Then he read a notice he had received from the Australian Family Association – a conservative Christian lobby group:

“This is an interesting one from the Australian Family Association. It is headed ‘Campaign to target MPs who support Civil Partnerships Bill’. It states—

An Australian Family Association leaflet campaign will target any MPs who back the controversial Civil Partnerships Bill,
scheduled for a tight vote in the Queensland parliament next week.

MPs who support the Civil Partnerships Bill can expect churches everywhere to help letterbox their electorates with leaflets similar
to those the AFA distributed in the seat of Capricornia in recent weeks (see below) though in this case the leaflet will conclude …‘When you vote … place___ MP last!’

“I do not agree with the Australian Family Association’s view that this bill is attacking the institution of marriage or is introducing same-sex marriage to Queensland. The God I believe in does not threaten or intimidate people who may have a different view. I say tonight to the Australian Family Association and to the other people who have contacted my office and threatened to campaign against me: I will vote for what I think is right and just, and I will not be intimidated, whoever you are. I will support this bill.

I do not wear my Christianity like a badge on my chest, but the God I know would never sanction behaviour that threatens people cruelly because of their genetic make-up.

… I believe this bill will simply provide for a registry whereby eligible heterosexual and homosexual couples in relationships can apply for registration as a civil partnership. I will be supporting the bill. As an Independent, I am proud that I am able to vote according to what I believe is right and just. I am not intimidated by anyone or any interest group.”

Contemptibly, the Liberal National Party not only voted as a bloc against the bill, they did so at the direction of their unelected leader, Campbell Newman who has put on record his support for same-sex marriage. Further, they did not even have the courage to explain their personal objections to the bill – only one representative for the LNP spoke against the bill, the rest sat silent.

People of Queensland should be aware that Newman and several of his MPs put aside what they knew and even acknowledged to be right in order to make a political point.  A sharp contrast to Peter Wellington who may well lose his seat for doing the right thing.

Those who voted against the bill were:

To thank Peter Wellington for his support of the Civil Partnerships bill email:  nicklin@parliament.qld.gov.au

15 thoughts on “Spotlight on Political Bigotry”