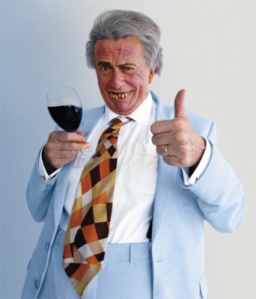 You know the old trope of the embarrassing uncle? The blathering black sheep of the family who insists on turning up at family gatherings? That ghastly, politically incorrect bigot who inevitably embarrasses himself with his anti-social behaviour and ruins the party for everyone else?

I just can’t help envisaging the Australian Christian Lobby as a Sir-Les-Pattersonesque mad uncle who has just rolled up at a party hosted by the very classy Canberra Hyatt – trashing, through association, the Hyatt’s otherwise-stellar reputation.

About now, I imagine, the management team at the Canberra Hyatt are wishing they’d shut all the doors and windows and just pretended they weren’t home when mad uncle Lyle Shelton and his despicable band of bigots came knocking.

Instead, the Hyatt agreed to host the Australian Christian Lobby’s annual conference this weekend – inconveniently forgetting their own pro-gay policy which stands in stark contrast to the obsessive bigotry and bastardry of the ACL.

Should anyone be in doubt that the Australian Christian Lobby exists, primarily, as an anti-gay hate group, consider this graph, compiled by Jacob Holman in 2012: 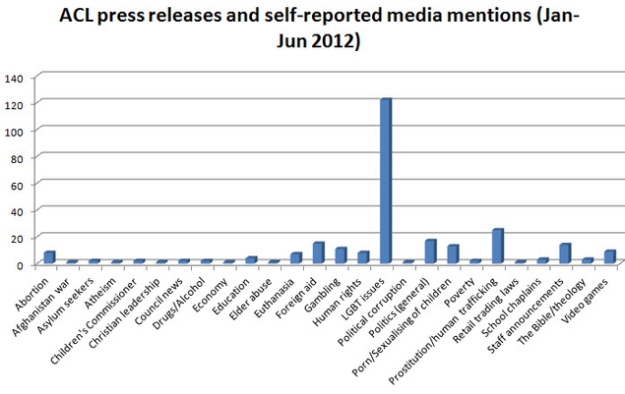 Now, as a general principle, I would not object to a commercial venue accepting a booking from the Australian Christian Lobby. As the Hyatt has, rightfully, pointed out, the ACL is not involved in illegal activity and venues can hardly be expected to vet every client to assess whether their ‘values’ are in line with those of the managers and/or proprietors.

In a former life I was the Queensland manager of a large international hotel chain. I certainly wouldn’t have expected my hoteliers to refuse bookings for accommodation or conferences on the basis that the client’s views conflicted with their own. And I certainly understand that hosting an event for profit does not imply the venue endorses the views of its client.

But, I think there are some circumstances where a venue may be well-advised to steer clear of a business relationship with a controversial individual or group. I would not, for example, want the brand of my accommodation house tainted by association with a group which was clearly racist (e.g. Stormfront or Restore Australia) or one whose efforts endangered lives – the Australian Vaccination Sceptics Network springs readily to mind here.

I don’t think it’s a stretch to suggest that homophobia is analagous to racism and that the high rate of LGBTI suicide – particularly among youth – is directly linked to a toxic, anti-gay culture fuelled by the likes of the ACL. The ACL functions to make homophobia respectable just as America’s Southern Baptist Convention once functioned to make racism seem part of God’s loving plan.

I don’t want to be inconsistent or hypocritical here. When The Grand Hotel in Mildura cancelled Catherine Deveny’s accommodation booking after she made some controversial comments about ANZAC Day, I objected on the grounds that it was none of the Grand’s damned business what opinions their guests might have.

“Apparently, it’s a new policy being tried out – guests’ political and social opinions must conform with management’s before a booking can be honoured,” I wrote.

Those clever bunnies at Quality are set to revolutionise the hotel industry! Just watch! Next we can segregate based on religion and race too. What fun!”

The ACL/Hyatt situation is, I think, rather different.

Increasingly, businesses like the Hyatt find their brands are strengthened by embracing positive values like diversity, equality and inclusiveness. Yes, it’s all very warm and fuzzy and good-corporate-citizenish for the Hyatt to publicly endorse human rights, marriage equality and oppose the bullying of LGBTI youth. But, it’s also good business. It’s a stance designed to make guests feel more warm and fuzzy about staying in Hyatt Hotels or holding corporate events at these venues. It’s hard to say that the Hyatt exploits the goodwill of the LGBTI community for fun and profit without sounding ungrateful for their support. But, ultimately, companies which support LGBTI rights are doing so, at least in part, because the goodwill of the LGBTI community and the vast majority of straight people who support their aims is good for the bottom line. And there’s nothing wrong in that! It’s a win-win situation.

Where things went pear-shaped with the Hyatt Canberra is that, while ‘exploiting’ their pro-gay credentials on the one hand, the hotel accepted a conference booking from Australia’s most high-profile, virulent, anti-gay lobby group – effectively assisting them to spread their malicious misinformation and blokey bigotry and lending the conference the cachet of the Hyatt’s name.

Had the Hyatt taken no position on LGBTI issues, I would have had no issue with them hosting the conference. I might have thought it was a dumb business decision, but I wouldn’t have protested against it. What has inspired me to take fingertip to keyboard in this case is the hypocrisy of the Hyatt taking a public (and profitable) pro-gay stance and then making money by hosting a group which devotes the vast majority of its considerable resources to opposing gay rights and pumping outrageously false anti-gay propaganda into the public square. That’s what differentiates this situation from that of Deveny and the Grand Hotel, Mildura.

Now the Hyatt has been educated about the fuck-wittery of these fundamentalist fools, they have been thrown into major damage control. But it’s too late to uninvite mad-uncle Lyle and his sorry band of sodomy-obsessed side-kicks. However, my friend, Troy Simpson has taken a calm and level-headed approach to the issue and, today, spoke directly with the folk at the Hyatt. Troy reports:

“Initially, the Hyatt faced a barrage of online messages calling for the Hyatt to cancel the ACL’s booking. But, today, the Hyatt has reached out to the LGBT community in three positive ways.

Second, the LGBT will urgently contact Rodney Croome and Ivan Hinton of Australian Marriage Equality (AME) to see what the Hyatt can offer the AME cause, such as donating a getaway at a Hyatt venue as a prize for an AME fundraiser.

Third, and most significantly, tonight the Hyatt will speak with head office in Chicago about issuing a statement that unambiguously reaffirms the Hyatt’s commitment to the LGBT community and suggesting that, next year, the ACL might find a different venue that better matches the ACL’s own “values”.”

The remarkable result is that, while the ACL will get to have their conference at the Hyatt, they come out of this looking like the massive embarrassment they are. They will be the embarrassing uncle at the Canberra Hyatt’s party. They will be tolerated rather than welcomed. They will be treated respectfully and courteously but they will clearly be there under duress – and there will be a huge, collective sigh of relief when they’re gone. What’s more, it seems their conference will, ironically, work to further the cause of marriage equality.

So, in the end, it’s a good outcome, But I expect, next year, when the ACL comes knocking at the Hyatt’s (or any other respectable event venue’s) door they may find the pervading stench of their presence acts as a powerful deterrent against anyone accepting their booking. The price of any kind of association with the ACL is increasingly not worth the stain it leaves on the corporate brand. It seems those embarrassing uncle types never stagger out the door without leaving behind a nasty stain on the carpet – and homophobia is such a disgusting and difficult stain to shift.