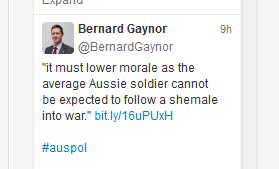 In the light of Bernard Gaynor’s prolonged and persistent persecution of distinguished transgender army officer, Lt Col. Cate McGregor AM (e.g. Malcolm can’t be a Cate; Some Jokers are real), I propose to follow Gaynor’s example and make a completely misinformed, inexpert, medically and psychologically inaccurate and inutterably malicious ‘diagnosis’ about what fuels his obsessive transphobia.

It seems to me that Bernard Gaynor must have an exceptionally small penis; teeny tiny – infinitesimal actually. We’re talking sub-atomic particles here.

Stop laughing! You can’t say it’s a novel thought. Just about everyone I talk to about this conservative Catholic failed politician has suggested the same. In quiet conversations over dinner if his name is mentioned, a little finger is invariably cocked and wiggled.

It’s true. The size of Bernie’s dick has been the subject of much back-room chatter on Facebook and Twitter. But, today, I’m bringing it out in the open – the question that’s been on the tips of everyone’s lips:

Does Bernard Gaynor have an exceptionally small penis?

Of course, even if he does, it would be incredibly cruel and insensitive to publicly humiliate Bernie for having a pinky sized pecker. If his member is actually as small as I think it is, it’s not his fault.

Indeed, if Bernard’s love-rod is Lilliputian it’s only because he was born that way; it’s the way God made him.

If Bernie is as tragically underendowed as the social network grapevine suggests, it would be grossly inappropriate to torment him about it in a blog. And really, there would be little purpose. It’s not as if he can’t divert us with a whole host of personal failings over which he does have some control. Gaynor is, after all, the politician who distinguished himself by being expelled from Bob Katter’s party for being too extreme! There’s a whole comedy routine in that alone!

Lest I be accused of responding to Gaynor’s cruel bigotry against Ms McGregor with an ad hominem attack let me make it clear. I am not saying that Bernard Gaynor is a misinformed, narrow-minded, nit-witted bullying thug because he has a small penis. That would be ad hominem. I’m saying that this despicable piece of transphobic shit deserves a good dose of his own medicine – preferably administered where the sun don’t shine and without lube.

Bernard Gaynor relies on out-dated religious prejudice to rationalise his persistent persecution of Lt. Col. McGregor.  Catholic transphobia stems from a bastardisation of St Thomas Aquinas’ thoughts on ‘natural law’. Based on Bernie’s troglodytic attempts at theology, it’s also entirely possible to misrepresent Thomistic philosophy to suggest that to be considered a natural man, one should be able to view his cock without squinting.

But, come on! Let’s be fair. Medical experts agree that penises come in all shapes and sizes. There might be an ‘average’ but there isn’t really a ‘normal’. Penises can be big, small, fat, thin, straight, bent, stiff, flaccid, light, dark, wrinkly, smooth, handsome or just plain fug-ugly.

It’s a lot like human sexuality really; there’s a spectrum of penises and not everyone’s going to conform to what you might think is normal or natural.

So, if Bernie’s smallgoods put him in a minority, that doesn’t mean he’s abnormal and it certainly doesn’t mean he should be held up for ridicule – no matter how much fun that might be for the rest of us.

Sure, we all have our personal preferences with regards to genitalia (I’m thinking of a particularly fine example as I write) and we’re entitled to our opinions about what is ‘optimum’. But, the fact is, if you don’t like someone’s penis, you don’t have to stand around looking at it, laughing at it, pointing at it and making its owner feel bad about it. Just move on, for Chrissakes – their penis is no more your damned business than their sexuality.

It’s actually been suggested (chiefly by me) that a lot of penis prejudice derives from the Old Testament. For example, Ezekiel (23:18-20), speaks admiringly of Egyptians ‘whose members were like those of donkeys, and whose issue was like that of horses’. Using the logic of religious bigots like Gaynor, it’s entirely reasonable to rip this single quotation from its context in order to argue that having a small dick is un-Christian.

Indeed, using Ezekiel as my inspiration, I may just start a religion which only admits men whose dicks dangle at least two inches below the knee. It will be a small congregation but I’ll be happy.

But seriously, is it really fair to take a passage from an ancient text and use it to crucify someone for a trait they were born with and can’t help? If Bernard’s tackle is the size of a hamster’s and his issue is more like that of a dripping tap than a rutting stallion is it ethical to name and shame him publicly for that?

No! That would be like – well … like hammering someone cruelly and repeatedly for having a medically acknowledged condition like gender dysphoria and suggesting they’re just playing ‘dress ups’.

To continually taunt Gaynor with small prick epithets would be as much an act of uncivilised red-necked bastardry as continuing to call a woman who has made the brave transition from male to female ‘he’, when she has made it crystal clear that she now identifies as a ‘she’.

Yet, perhaps there is a difference. May I submit that to suggest that religiously motivated bullies like Gaynor may have pin-sized pecker syndrome is probably the mildest criticism that can be made of them.

The fact is, Bernie old cock, people (like penises) simply don’t conform to a narrow view of ‘natural’ – neither yours nor mine. And, nor should they.

Now, I have to admit, I’m only guessing that Bernie’s prick is petite. But why let the truth get in the way of a good mud-slinging, eh G-man? I’m sure you won’t consider anything I’ve said here as defamatory. After all, you’ve been making inexpert, misinformed and cruel jibes about Lt. Col. Cate McGregor for months now and apparently that’s perfectly OK.  Besides, Bernie, it’s going to be a bit hard to argue in court that you can’t get a job because someone on the internet suggested you might have a small prick – everyone knows your prick is the least of your problems.

Let me be clear. Men with small penises did not choose to be that way and do not invite or enjoy the ignominy heaped upon them for something they can’t (easily) change.

And let’s be fair. I’ve had no more access to Bernie’s trousers than he’s had to Cate McGregor’s medical records (the Lord be praised!). We are equally ignorant about the subjects we’re writing about. I readily concede that it’s quite possible Bernie’s penis is no more miniscule than Cate McGregor is a ‘shemale’. (Although, on the basis of probability, I would argue strongly that the former is far more likely than the latter.)

But I have taken no more liberties with the truth than Bernard, himself. Just as I have ‘supposed’ that Bernard’s member is disconcertingly diminutive, Gaynor has assumed (based on absolutely no credible evidence other than religious prejudice) that Cate McGregor is a man masquerading as a woman. With respect to Cate, nothing could be further from the truth, but it doesn’t stop Gaynor rabbiting on with cruel, nasty, juvenile jibes that would put a fifth grade school yard bully to shame. It certainly dishonours the ADF and the Catholic Church with whom he is associated.

Cate McGregor is all woman but she’s twice the ‘man’ that Bernard Gaynor is. And, even if it turns out Bernard’s penis is the size of a blue whale’s wanger, I would still argue that his conduct in respect to Ms McGregor reveals him as a flaccid little milquetoast of a man whose obsessive transphobia suggests he has far more issues with his own masculinity than even a very small penis might engender.

I believe the Australian Defence Force is considering kicking Bernie’s sorry ass to the curb.  They’re taking their time. Does the Australian Army really tolerate this level of incivility and abuse from its members towards a distinguished serving officer? As the daughter of a military family, I had hoped for better.

May I also respectfully address Cardinal Pell, and suggest that the church officially distance itself from this travesty of a Catholic who rivals even Pell’s valiant efforts at bringing the church into disrepute.

And Bernie, love …  if you want to quash the rapidly spreading rumours about your wee willy, just whip it out, take a selfie, get a JP to confirm that it’s ‘really you’ and not some penis-double you hired for the occasion, and I’ll gladly publish it here on my blog. Can’t say fairer than that.

Want to know more about me? (Hint – I don’t have a penis.)  Check out my profile on LinkedIn.