Brian Martin is Professor of Social Sciences at the University of Wollongong and fancies himself as a champion of whistleblowers. When the whistle-blowing is legitimate, that’s a fine and honourable pursuit. But, when someone in a position of authority can’t tell the difference between whistleblowers and conspiracy theorists it’s cause for concern. When those conspiracy theorists actively endanger lives, it’s cause for alarm.

Professor Martin has been a staunch defender of Meryl Dorey and her appalling Australian [anti] Vaccination Network. He is the PhD Supervisor for anti-vax campaigner Judy Wilyman. Wilyman’s Masters degree is currently the subject of investigation for academic misconduct. 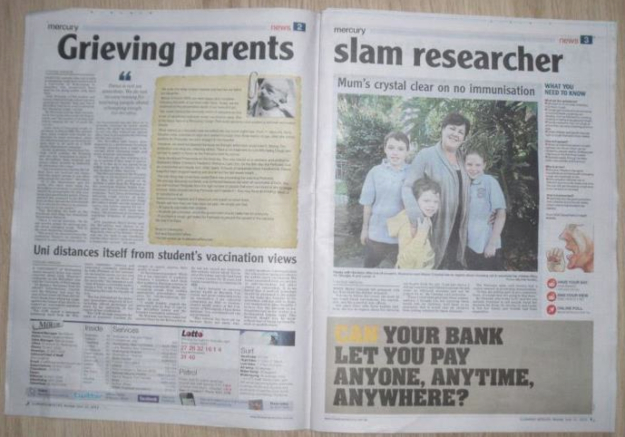 But Professor Martin claims he has no ‘strong views’ about vaccination;  that his interest in the anti-vaccination debate is all about free speech.

Free speech is all very well. But, when propaganda and misinformation from uneducated rabble-rousers endangers the lives of children and vulnerable people, I think we can rightly argue free speech must have limits.

Whether or not Professor Martin is an anti-vaxxer himself, his work enables these anti-science, numb-skulled conspiracy theorists. The connection with Professor Martin and the University of Wollongong lends credibility to them while tainting him, and more importantly, the university that supports his and (by association) their work.

Dr Matthew Berryman, author of the complexitydaemon blog,  is appalled by Professor Martin’s involvement with some of this country’s most prominent anti-vaccination propagandists. Dr Berryman is an academic at the University of Wollongong. His degrees are in science, mathematics, computer engineering and systems analysis.

Berryman is the co-author of the 2013 paper “Answering human papillomavirus vaccine concerns; a matter of science and time“, published in Infection Agents and Cancer, an open access, peer-reviewed online journal.

In an interview with the Illawarra Mercury in 2012 regarding Judy Wilyman’s PhD candidature, Dr Berryman said:

In a blog post, published today, Dr Berryman draws our attention to a book chapter written by Dr Martin in Nonviolence Unbound. Martin’s chapter deals specifically with the clash between the Australian [anti] Vaccination Network and Stop the AVN, a Facebook-based citizens group which doggedly opposed and exposed the AVN for years, effectively bringing it to its knees – for now.

That this was all achieved legally, backed by decisions against the AVN’s dodgy practices by various Australian health and regulatory authorities, does not seem to deter Professor Martin one iota. Instead, in Chapter 8 of Nonviolence Unbound he suggests a number of strategies the AVN might use to circumvent the Australian laws which have so constrained them.

You can read all about it on Dr Berryman’s blog:

The AVN fought the law and the law won: AVN stopped

The University of Wollongong must be so proud that one of its academics can, so cavalierly, aid and abet an organisation which actively compromises the health and lives of Australian children. Stay classy, U of W.

PS: Ms WIlyman thinks very highly of me, too.