In a fairly surreal moment, I’m sitting on a sofa next to Ron Williams in a Canberra apartment, watching Ron Williams on ABC’s Lateline. 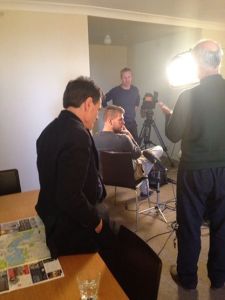 The interview, focussing on Williams’ second High Court challenge to  Federal funding for the National School Chaplaincy Program, took place earlier in the afternoon in this same apartment, soon after we arrived.

Ron and I, along with Hugh Wilson, National Director  of the Australian Secular Lobby, are ‘housemates’ for the next week. It’s an unofficial ‘team’ and our apartment has quickly become the unofficial HQ for Ron’s many Canberra friends and supporters.

The Lateline story comes up and we watch, with some dismay, as Ron’s novelty song, “Why Don’t Bees Go to Heaven?” plays as an intro.

Our eyes widen and we look at each other in disbelief.

In the Sydney Morning Herald today, constitutional expert, George Williams, referred to the forthcoming Williams case as “the most anticipated of the year”; a case that could “could rewrite the book on how the Commonwealth and the states spend public money.”

And yet, instead of an interview with Professor Williams  explaining how Ron’s case could rewrite Australian Constitutional history, Lateline wasted valuable airtime playing a fun but totally irrelevant song that has nothing, zero, zilch, nada to do with Williams’ case.

In my own article, published today at Independent Australia, I explain how the Williams case has evolved beyond its initial focus on school chaplaincy to a defence of representative democracy and financial accountability.  It’s an angle that seems to have eluded the producers of Lateline.

Whoever put this story together seems to have thought – mistakenly in my view – that it needed ‘padding’.

God forbid (no pun intended) that Eddie Mabo or Brian Pape had released a music video prior to their forays into the High Court! Would Aunty have thought it appropriate to cut their playful little ditties into stories about their landmark Constitutional cases? Would reports on Mabo have benefited from a peppy little jingle?

Williams vs the Commonwealth and Others (2) will be played out in the High Court of Australia over the next three days. This is a deadly serious, historic case on a crucially important issue affecting all Australians.  It’s up there in importance with Mabo and Pape.  It deserves a little respect. It didn’t get that respect tonight on Lateline.

The Williams case is not just about chaplaincy. It’s about whether the Federal government should, arbitrarily, be able to sign off on massively expensive programs without jumping through the hoops put in place by the Constitution.

It’s also about the questionable validity of fundamental changes that have been made to the ‘rules’ about government spending; changes which seem to ignore the principle that, in a representative democracy, government expenditure requires parliamentary scrutiny.

Constitutional expert, Anne Twomey, describes the Federal government’s cynical response to the decision in Williams’ first case as “… an abject surrender of its powers of financial scrutiny to the Executive”.

I can just imagine the production meeting:

“Yeah, yeah, selling out representative democracy so that governments can fund pork-barrel programs, circumventing a decision of the High Court, rubber-stamping billions of dollars of government expenditure, spending half a billion taxpayers’ dollars to buy votes from the Christian right … It’s all very well, but where’s the public interest, guys? Where’s the hook?”

“I know! Williams is a singer. What this story really needs is music.”

Seriously, ABC? Seriously?????? Has it really come to this?

And, at issue, isn’t just the use of the silly song, the presentation of an historic constitutional case as a ‘fluff’ piece and the implication that ‘atheism’ is the driving force behind Williams’ attack on chaplains (it isn’t, as Ron would happily have explained to Stewart if Stewart had bothered to ask (but didn’t)).  What really irked us is that the story completely misrepresented what the case is about.

Hugh Wilson and I winced in unison as Peter James of Scripture Union came on to repeat  the now familiar SUQ mantra that chaplains are wonderful people doing great work in our schools. Maybe they are, maybe they aren’t. You wouldn’t expect James to say anything else. But a senior political journalist reporting on a High Court case should have realised (and perhaps found someone to explain to viewers) that the performance of chaplains is absolutely irrelevant to the success or failure of the Williams case.

The great pity is that neither the non-government defendant (Scripture Union) nor John Stewart,  seem to grasp one very simple concept about Williams vs the Commonwealth and Others:

“It’s about the Constitution, stupid!“

What is relevant is that the High Court has already ruled in Williams (1) that  successive Commonwealth governments have been spending taxpayers’ money without appropriate authority and beyond the limits of their constitutional powers.

What is relevant is that in order to continue doing what the High Court said they shouldn’t, the government passed legislation which undermines the Constitutional role of the House of Representatives and the Senate in approving expenditure.

What is disappointing is that in a four minute story, Ron singing a fun, but ultimately meaningless song about bees was inexplicably deemed more important than explaining to the Australian public why this case should matter to them  – regardless of their views on chaplaincy.

After the program, we had quite an animated discussion about the story.

What was the point of cutting in Ron’s “Bees” video?

To add  ‘entertainment value’ to an otherwise dull story?

To diminish Ron’s credibility with the public?

To flesh out a story a journalist mistakenly thought had insufficient substance?

“It’s disappointing,” said Hugh Wilson, “that a high quality program like Lateline with a top-notch political journalist like John Stewart would stoop to cheapening an important story with irrelevant fripperies.”

“The producers have confused an important constitutional issue with a personal point of view and a rorting of the system with a novelty song that predates the High Court Challenge,” Wilson lamented.

I was a little more sanguine. The song was, after all, in the public domain. I  thought it was probably predictable (if both lazy and disappointing) that a journalist or producer would think it was a good idea to use it as ‘leavening’ for a story that could have stood on its own merits if only they’d taken the time to understand it. Ron was his usual calm self, but perhaps a bit puzzled that a journalist of such long experience could so cavalierly undersell the national significance of the case.

Ultimately, we decided, it was of no great import. The poor and arguably irresponsible reporting of the Williams’ case on Lateline will have no bearing on the decision of the High Court. Ultimately, the choices made in presenting the story reflect more poorly upon Lateline’s credibility than Williams’ reputation.

And now,  it’s the wee, small hours of the morning and both Ron and Hugh have, sensibly, retired. They have lost, I expect, not one jot of sleep over a story we had rather hoped would be good, but wasn’t.

And having vented my spleen, I’m heading off too; because what happens tomorrow, in the High Court, amongst professionals who actually understand what this case is about, is what counts – not just for Williams but for every Australian.

It’s about the Constitution, stupid.

If, unlike Lateline, you understand the significance of this case and appreciate that a suburban Dad with very little money has had the guts to take on the Federal government, not once, but twice, in the High Court, you can donate towards Ron Williams’ legal fees at his website: http://highcourtchallenge.com

7 thoughts on “Williams Day – 1: It’s about the Constitution, stupid!”