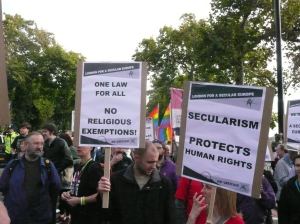 I tend to spend a lot of my time slamming religious extremists and bigots on this blog. But, I believe that credit is due to those Christian organisations which take a more enlightened view. In light of the current debate about exemptions from anti-discrimination laws for religious organisations, it’s important to note that the view of extremist ‘stakeholders’ like Jim Wallace’s Australian Christian Lobby do not represent the ‘mainstream’ Christian view. Why does our Prime Minister and Attorney-General Nicola Roxon not take note of this? This is the burning question!

So, congratulations to UnitingJustice Australia, the justice unit of the National Assembly of the Uniting Church in Australia. Their submission to the senate standing committee’s inquiry into the human rights and anti-discrimination bill, 2012, clearly states their (qualified) opposition to religious exemptions.

It is, in my view, a sensible and well thought out argument which puts the so-called ‘Christian ethics’ of the ACL to shame.

Here is the section that deals with exemptions from anti-discrimination laws for religious organisations, submitted in December 2012:

That the sections governing religious exceptions be amended to remove those protected attributes that are not demonstrably justified by religious needs.

While we believe that the right to freedom of religion is of vital importance, and its recognition necessary, we do not believe that this is an absolute right. We acknowledge, then, that the exercise of religious freedom is subject to the regulatory norms that govern Australian society. Importantly, we support the International Covenant on Civil and Political Rights statement that discussions in this area must consider whether an exemption is “demonstrably justified in a free and democratic society based on human dignity, equality and freedom”

We are concerned, however, with section 33 of the Anti-Discrimination Bill, and feel that it gives too wide an exemption to the activities of religious organisations and institutions. We do not believe that it is necessary, in light of the need to balance the rights of the wider community with the freedoms to be afforded to religious groups, to grant an exception to that permits discrimination when that discrimination consists of conduct, engaged in good faith, that:

When religious bodies are provided to what amounts to a ‘blanket exception’, there is no incentive for that body to ensure that it does not discriminate, and no incentive to promote equality and inclusion in areas of employment and representation other than those leadership positions necessary to maintain the integrity of the religious organisation.

While we acknowledge “the need for some level of exemption, to allow faith-based organisations to maintain their integrity according to the tenets of the relevant communities” faiths, references in the Anti-Discrimination Bill to concepts such as “doctrine”, “tenets of that religion” and “injury to religious sensitivities” are, in many cases, unhelpful. This language is contested even within religious communities themselves, and so to require participants in court proceedings to present and decide on a definitive definition of any of these terms is problematic.

In its submission to the Australian Human Rights Commission’s Freedom of Religion and Belief in the 21st Century project, the Uniting Church National Assembly stated our support for federal legislation prohibiting religious discrimination, including a specific provision which allowed for discrimination on the basis of religion by faith communities in the area of employment in leadership and teaching positions, where it is reasonably necessary for maintaining the integrity of the religious organisation.

Several of the protected attributes listed under sections 32 and 33 disproportionately impact women, including pregnancy, potential pregnancy, breastfeeding and family responsibilities. There are no justifiable grounds for the inclusion of such attributes.

Indeed, they serve only to act as a proxy of sorts for enabling discrimination on the grounds of gender. For this reason, we do not support the wide-ranging list of exceptions granted to religious organisations and institutions under the proposed legislation.”

Well, Prime Minister, Ms Roxon? Why does the ACL’s view trump this one? Please explain …

Please use GetUp! to contact Nicola Roxon and your local political representative about this matter. And please spread GetUp’s link among your own networks.

Congratulations and thanks also to Joumanah El Matra, Executive Director of The Australian Muslim Women’s Centre for Human Rights. El Matra has  also opposed the legislation exemptions – Shutting out the ‘sinners’ feeds bigotry – The Age, 18/1/13

Has our first female PM legitimised misogyny? – Dr Jennifer Wilson at No Place for Sheep