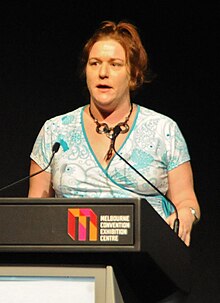 What kind of bastardry does it take to for a multi-million dollar enterprise (in league with the NSW Police) to pursue a criminal conviction against a single mother for two years over a minor infringement she had no clue she had committed?

What if that single mother’s career – her only source of income – depended on a clean record?

What if the woman’s only crime was standing in a non-ticketed area, on a public concourse, outside a publicly owned convention venue?

Petty? Nasty? A waste of police resources and precious court time? Lacking in common sense? Yes!  All of these things. But, what if it’s far worse than that?

What if the organisation intent on destroying the life, career and financial security, (not only of this woman, but her teenage son), was a church? Hillsong Church.

That’s the position my friend, writer and social worker, Tanya Levin, found herself in over the past two years.

When Hillsong held their annual convention at Olympic Park in Sydney in 2015, the television show, A Current Affair, asked her for an interview outside the convention venue.

Tanya grew up in Hillsong Church. In 2007, her memoir, People in Glass Houses: An Insider’s Story of a Life In and Out of Hillsong, was published to great acclaim and wide publicity. Tanya wrote the book critically, but with no malice. As she transitioned from teenager to adult, Tanya’s religious and political views changed and she became increasingly uneasy about the church’s values, priorities and wealth. But, her book (which I’ve read twice) was not a hatchet job. At worst, it was a fair and balanced account of her personal views on a very public and very wealthy organisation. As Hillsong sued neither Tanya nor the publisher, one can only assume any negative claims made in the book were truthful and not defamatory. Yet, hyper-sensitive to any kind of questioning or criticism, the church slapped Tanya with a life-time ban in 2005 for daring to disagree publicly with church leader, Bobbi Houston.

In her book, Tanya describes how she tried hard to do the right thing by Hillsong. She wrote twice to church leaders, Brian and Bobbi Houston, asking for an interview to get their side of the story, but she was refused. She genuinely didn’t want to be unfair. Tanya went back to the church to observe a service in case things had changed since she was a member of the congregation: the Houstons had her forcibly removed by security!

Eight years later, the Houstons’ wrath had clearly not cooled. As Tanya stood with the television crew, outside the convention venue, on a public concourse, they were approached by police and told they were ‘trespassing’. The claim was that Hillsong had rented both the stadium and the area surrounding it. Despite the concourse area being open to passing members of the public, as an outspoken critic of the church, ‘banned-for-life’ Tanya Levin was not welcome. Tanya and the ACA team complied and moved to another area. In fact, the police record states Tanya ran to comply with their request!

After the interview, Tanya inadvertently stepped back into a space designated as ‘private’ (although there was no barrier, marking or other indication to delineate it). Now, she was beckoned back well inside the ‘perimeter’ by a police officer. She was astonished to be told, as this was her second infringement, she was under arrest.

As Tanya said to me privately, “I’m South African and terrified of the police. It’s weird. If a policeman tells me to move, I move!”

There is absolutely no way she would have trespassed intentionally. Anyone who knows Tanya knows that. The irony is that two people who know Tanya best – who have known her since childhood – are Hillsong’s leaders, Brian and Bobbi Houston.

The police record also notes, ominously, that Tanya was seen ‘speaking to children’. The truth is, after her interview, a 15 year old approached Tanya to ask why she’d been moved on by police. Natural curiosity. Tanya, politely, asked the young lady  if she enjoyed attending Hillsong. The girl replied “no”: she was forced to attend by her foster family. She said Brian Houston made disparaging remarks about people suffering from mental illness and it made her uncomfortable because she had ‘mental problems’. That was the extent of the conversation – entirely at the instigation of the young lady. God forbid she should grow up to voice any criticism of the Houstons or their church or she may find herself in the same position as Tanya!

Tanya was removed and interrogated before being allowed to leave. The people at A Current Affair wanted nothing to do with it and gave her no support – certainly, no financial support – to fight the charges.

Tanya was traumatised. And the trauma was dragged out for 2 years as she was forced to find the financial and emotional resources to fight a multi-million dollar organisation and the NSW police in court to prevent being branded a criminal.

At her first hearing, Tanya was found guilty and a criminal conviction was recorded.  It was devastating. The decision severely limited her ability to find a job in her chosen profession – as a social worker – or in any other profession for that matter. She was innocent, but did not have the financial resources to fight it. And yet, her only recourse was to appeal.

Tanya’s friends rallied and helped raise some funds for costs. Through her social network, an experienced solicitor and barrister with a distaste for religious bullies offered to represent her pro bono.

Last week, a magistrate decided, while there was no technical error in her previous conviction, Tanya’s ‘impeccable character’ and previously clean criminal record, together with the fact she could not, reasonably, have known she was committing a crime, warranted the conviction being overturned.

Tanya was deemed to be a person of ‘impeccable character’; it is a great deal more than can be said for the church which pursued Tanya out of fear, spite and raw hatred. Ironically, if Brian Houston had emulated the religious figure he exploits to fund his multi-million dollar empire, he would have stepped in to ask for the charges to be withdrawn. Instead, he did nothing. He certainly never stopped to ask himself, “What would Jesus do?”

And what of the police service which aided Hillsong in this ridiculous, costly and unfair persecution? One can only hope now-retired Police Commissioner, Andrew Scipione, a close friend of Brian Houston and his church,  was not involved in this tawdry and unjust witch hunt.  And what is the relationship between Hillsong and the NSW Police now Scipione is gone? If there is an  alliance between Hillsong and the NSW Police, it seems a hell of an unholy one, to me.

A note from Tanya

73 thoughts on “Hillsong Church vs a Woman of ‘Impeccable Character’”