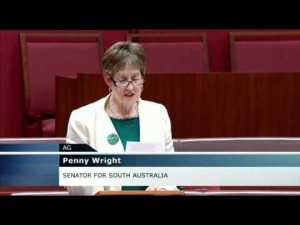 Senator Penny Wright (Greens, spokesperson for schools) made a fine effort today trying to get some answers from the government about Mr Abbott’s $37 million gift to chaplaincy providers (see my two previous posts).

Following is a media release from Senator Wright’s office.

Senator Wright said the Commonwealth Government’s explanation that chaplains and welfare workers would now be overseen by State governments was inadequate.

“The High Court decision means the chaplaincy program can no longer be funded or administered by the Federal Government – the Federal Education Department website clearly spells this out,” Senator Wright said.

“So all the guidelines, codes of conduct and complaints procedures have gone out the window.

“But because the Commonwealth has chosen not to recoup money not yet spent, chaplains and welfare workers will remain in schools until the end of the year.

“The Australian Government must not deny responsibility for this – the states cannot simply take over the Federal Education Department’s administration of the invalidated chaplaincy program.

“The Federal Government needs to explain how they will ensure the safety and wellbeing of students for the next six months.”

In response to the High Court decision invalidating the National School Chaplaincy and Welfare Program, the Coalition announced it would waive the subsequent debt on payments made to date, including $74 million for 2014 – allowing chaplains and welfare workers remain in schools until the end of the year.