So, my dear friend Margaret received a letter, today, from a group called “Defending Natural Marriage”.

They asked that Margaret sign a petition and return it to them – kindly making it postage paid – so they can present it to Parliament.

Margaret is known for her fierce commitment to ethical and moral standards and, therefore, was understandably eager to complete and return the petition. But, as you can see below, not without a few minor edits of her own: 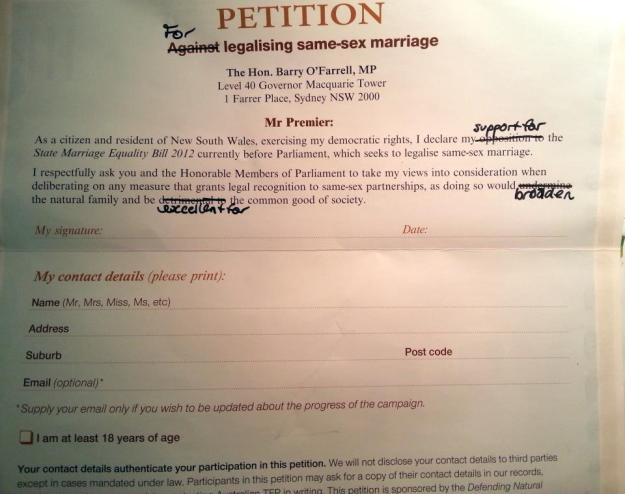 It seems to me that Margaret’s version is much better than the original. So, if you’re from NSW might I encourage you to contact Premier O’Farrell either by snail mail or by email to office@premier.nsw.gov.au and copy and paste Margaret’s amended text into your message?

Mr Premier:  As a citizen and resident of New South Wales, exercising my democratic rights, I declare my support for the “State Marriage Equality Bill 2012” currently before Parliament, which seeks to legalise same-sex marriage.

I respectfully ask you and the honourable members of Parliament to take my views into consideration when deliberating on any measure that grants legal recognition to same-sex partnerships, as doing so would broaden the natural family and be excellent for the common good of society.

— Don’t forget to include your name, address and email —

If you’re not from NSW, I’m sure the Premier would still be delighted to hear from you. Just amend the first sentence to:  I am not a resident of New South Wales, but, even so, I wish to declare my support for the “State Marriage Equality Bill 2012” currently before Parliament which seeks to legalise same-sex marriage.

And, of course, many thanks to the folks at “Defending Natural Marriage” for prompting us to remind our politicians that bigots and homophobes are the vocal minority and do not represent the views of the majority of fair-minded Australians or even the majority of Christians.