Following the revelation that Gloria Jeans donated $30,000 to Australia’s pre-eminent anti-gay organisation, the Australian Christian Lobby, I (along with many others), have called for a national boycott of your stores. I realise this is harsh on franchisees who may not share your founders’ extremist, homophobic views. But it seems only a boycott will motivate store owners to put pressure on your company to change its historic, and on-going support for anti-gay organisations.

Yesterday, Gloria Jeans issued a statement which said in part:  “ it is important to reiterate that we are not religiously affiliated or affiliated to any other beliefs or preferences, including Hillsong … We are proud of our culture of equality and embrace diversity across our entire business.”

I think you might have been fudging – just a little.

You see, I looked into Gloria Jeans “With Heart” charitable foundation and noticed that the two major recipients of your philanthropy – Compassion Australia and Opportunity International – are both Christian evangelical organisations. Surely that is not just coincidence?

Compassion Australia is part of the Compassion International Global network. Compassion uses the ‘child sponsorship’ model to work with children in poverty throughout the world. Very admirable at first glance but let’s look closer.

I’d like to begin our exploration of Compassion Australia and its global partner by introducing you to my friend Rodney Chiang Cruise and his family.  Rodney is a patent attorney from Melbourne;  his husband, Jeff, is a library technician. They are your average young, professional family with three beautiful young children. 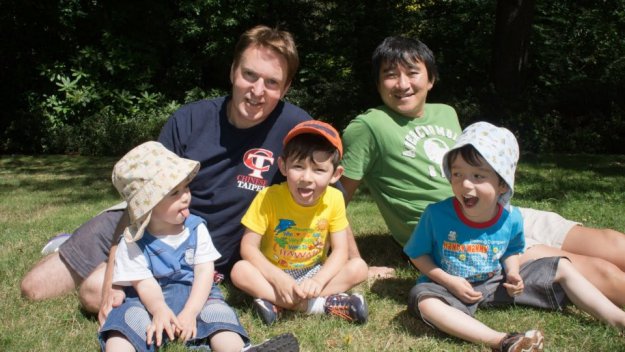 I don’t know about you, Gloria Jeans, but when I look at this photo, the words that spring to my mind are ‘normal’, ‘wholesome’ and ‘happy’.  The Chiang Cruises are the epitomy of a solid, middle-class, respectable Australian family – just the sort who are likely to patronise Gloria Jeans Coffee.

And yet, if my friends Rodney (left)  and Jeff  (right) wanted to sponsor a child through Compassion Australia – the charity your company supports through your “With Heart” program – they would be faced with some rather major obstacles.

Having agreed to sponsor a child, the Chiang Cruises would receive an instruction kit with instructions on how ‘to write to her, encourage her and develop a relationship with her’. But, the Compassion guidebook would warn that their correspondence will be censored and that “materials that condone lifestyle choices inconsistent with our beliefs, such as those: condoning sexual relationships outside the heterosexual marriage covenant or advocating the living out of a homosexual lifestyle” will not be forwarded.

Rodney and Jeff may be able to sponsor a child through Compassion Australia, but they would not be able to send photos of their happy family or describe their every day family life. To add insult to injury, just as Gloria Jeans refers to homosexuality as a ‘preference’, Compassion describes it pejoratively as a ‘lifestyle’.

Just to be sure the message has got through, a warning on the form provided to write a message to your sponsored child reads:

“Please do not send communications … or comments condoning sexual relationships outside the heterosexual marriage covenant.”

Now, of course no one in their right mind is going to write to a sponsored child about the wild night of gay sex they had last night; of course that would be inappropriate, just as it would be inappropriate to write to a child about your heterosexual sex life. But, that’s not what we’re talking about here. We’re talking about a normal family with two dads (or two mums) simply sending a child family photos like the beautiful photo above. That would not be acceptable to Compassion.

I imagine that if I sponsored a child through Compassion and wanted to write about spending time with my friends Rodney and Jeff and their three children, that would be censored too. Compassion children are not allowed to know that homosexuals can marry, have children and happy, healthy, thriving families. It might suggest that homosexuality is ‘normal’. It might lead to tolerance for homosexuality in countries where homosexuals face persecution and, often murder. That would never do.

Given your founders’ close connection with Hillsong Church, I was not surprised to find that Compassion Australia also has a very close association with Hillsong.  Hillsong boasts that it is the largest single sponsor of Compassion International children. As you’re probably aware (but didn’t mention when you were busy distancing yourself from Hillsong yesterday) Compassion Australia is a major supporter of Sydney’s annual Hillsong conference and Colour Your World women’s conference.  It’s all very cosy.

Of course, helping poverty stricken children and families is to be applauded – but this is help with an agenda. Compassion is an evangelical ministry. Children are not just housed, fed and clothed – they are brainwashed into fundamentalism; a fundamentalism which condemns homosexuality as sinful.

To carry out its work, Compassion partners with churches in the countries in which it works. But they are highly selective. Partner churches must be ‘part of an evangelical denomination’ – none of those wussy liberal churches allowed. Even in Brazil, where 70 per cent of the population is Catholic, Compassion do not, apparently, partner with Catholic churches.

The aim, you see, is not primarily to feed the poor, but to spread the faith – a very particular brand of the faith with very particular fundamentalist, literalist views. The kind of faith promulgated by, let’s say, Hillsong Church and the Australian Christian Lobby,

In countries where Compassion is dealing with HIV/AIDS their attitude towards homosexuality raises serious concerns. As one sponsor wrote:

“My family recently (last weekend!) sponsored a young boy in Rwanda through Compassion. I’m concerned about the comments here regarding the organization’s stance on homosexuality. We sponsored this young boy in large part because of his living in an area with a horrifically high incidence of AIDS. We wondered why this young boy had been on the waiting list for over 6 months- now, perhaps it’s a little clearer. I hope to discover the people working through this organization are teaching these vulnerable people ALL the ways in which AIDS is spread … ours is not to judge the soul into which the person is born, ours is to promote safe practices and the knowledge that we are ALL God’s children.

I would hate to think our young man – already feeling marginalized by a world around him – would be any less educated about the risks involved in ANY unprotected physical relationship. Given what we know in 2009, we cannot afford to support the naive notion that telling someone who they are, is wrong- and will change who God made them to be-dangerous territory, if you ask me.”

So, what does Compassion teach about HIV/AIDS prevention? The answer will send shivers down the spines of my friends who are experts in this area and familiar with ‘world’s best practice’.

According to Compassion International:

Our goal is to reduce the incidence of new HIV infections among Compassion-assistedchildren through a focus on purity in sexual behaviors (abstinence and faithfulness) and the prevention of mother-to-child transmission (PMTCT).

…  grassroots, local churches are well positioned to present the positive, life-giving message of “sex within marriage” that African youth need to hear — and to which they do respond. Uganda, for example, has witnessed a decline in HIV prevalence from roughly 12 to 4.1 percent over the past decade and that decline is largely attributed to successful prevention strategies encouraging abstinence and faithfulness.*

Compassion funds will not be used to purchase or promote the distribution of condoms. The message of “safe sex” to youth is contradictory to the Biblical message of sexual purity.”

For many years Willow Creek (in the USA – I don’t know about Australia) had a close relationship with Exodus International – the notorious ex-gay ministry – although that relationship has since ended. While coming to the acceptance that homosexuality cannot be ‘changed’ Hybels (and presumably his church) are a long way from accepting homosexuals. “We challenge homosexuals and heterosexuals to live out the sexual ethics taught in Scriptures, which encourage sexual expression between a man and a woman in the context of marriage,” says Hybels. Hybels adds that the Bible prescribes “sexual abstinence and purity for everyone else.”

This seems to echo Compassion’s commitment to the ‘Biblical message on sexual purity’.

So, let’s get this straight, Gloria Jeans. Yesterday, you denied your company had any ‘religious affiliations’. You declared that Gloria Jeans ’embraced diversity’  and does not  ‘discriminate against others based on their beliefs or preferences’.  (I wonder if you realise how revealing the phrasing of that last sentence is: Homosexuality is no more a ‘preference’ than heterosexuality;  and should not be referred to as such.)

In your statement, you note that: “The religious affiliation and preferences of some our management, Franchise Partners or Team Members, is their personal choice and bears no relevance to the way that our business runs day to day.”

Then how do you explain the fact that one of the major recipients of your philanthropy just happens to be an evangelical Christian organisation with close links to Hillsong Church? Did you think no-one would notice? Given your company’s propensity for making corporate contributions to anti-gay organisations such as Mercy Ministries, Hillsong and the Salvation Army, how do you explain that even a little investigation found similar anti-gay sentiments within Compassion Australia?

It is disingenous to believe that a non-discriminatory policy in your stores excuses you financing anti-gay groups at a corporate level.

Why, given Gloria Jeans salutory experience with Mercy Ministries did you decide to throw your weight behind another fundamentalist, evangelical organisation with close links to Hillsong?

I’m sorry, Gloria Jeans. I’m not buying your lame attempt at PR spin. Gloria Jeans corporate contributions – both past and present – align with the homophobic views of founders Nabi Saleh and Peter Irvine. As long as that continues, I will continue to boycott your company and I expect that the tens of thousands of people who have joined the boycott will be similarly unmoved.

*In fact, the drop in HIV prevalence in Uganda is attributed to the Ugandan government’s ABC campaign:  Abstinence, be faithful, use a condom if A and B fail. One of the most recent studies, showed that while abstinence and fidelity rates were declining, HIV/AIDS rates were not rising. This suggests condoms are playing an important role in HIV/AIDS prevention in Uganda. Sadly, another reason for the decline in prevalence was the high rate of premature deaths of those who had contracted it.

Doug Pollard writes the perfect accompaniment to this article:  An Open Letter to Starbucks