In October 2004, when asked for his opinon on same-sex marriage, Barack Obama replied, “What I believe is that marriage is between a man and a woman … we have a set of traditions in place that, I think, need to be preserved …I don’t think marriage is a civil right.”

By 2010, the President had softened his stance, saying, “My feelings about this are constantly evolving. I struggle with this.”

In October 2011, when asked if he would extend his support for civil unions to same-sex marriage, he replied, “I’m still working on it,”

And, this week, a fully ‘evolved’ Obama said:

“I’ve been going through an evolution on this issue. I’ve always been adamant that gay and lesbian Americans should be treated fairly and equally. At a certain point I’ve just concluded that, for me personally, it is important for me to go ahead and affirm that I think same-sex couples should be able to get married.”

This is a courageous move for Obama. He leads one of the most religious countries on earth. He is facing a difficult election against an openly religious opponent. He is not an atheist – he is a Christian – and his views will not be popular with many of his religious supporters. And yet, despite the possible political consequences, he has decided to speak out for what he has come to believe is right and just.

In contrast, our own atheist Prime Minister, Julia Gillard says she opposes same-sex marriage. She confirmed today that she will not change her mind on this issue, despite Obama’s change of heart. It appears that, like the religious zealots of the fundamentalist Australian Christian Lobby, Gillard’s mind and heart are shut firmly against reason and compassion.

Unlike Obama, Gillard refuses to ‘evolve’. In fact, it appears that she has ‘de-evolved’.

When she was at university, Gillard was a staunch supporter of gay rights, as this old news clipping shows.

“If elected,” said the young Julia Gillard, “I will encourage action on women’s rights, anti-nuclear policy and homosexual rights.”

Gillard’s objection to same-sex marriage cannot be religious. She is an atheist.

It cannot be the result of homophobia. Gillard appointed Penny Wong, an openly gay woman in a stable same-sex partnership, to the very senior cabinet position of Minister for Finance and Deregulation.

It cannot be a commitment to the ideal of traditional marriage. Gillard, herself, lives in a de-facto relationship with partner, Tim Mathieson.

Gillard has hinted that her Baptist upbringing influences her worldview. But, it was obviously not influential enough to convince her that God exists, or that living ‘in sin’ is wrong. Further, some Baptist clergy have openly spoken out in support of same-sex marriage. Gillard’s opposition is in line only with hard-line Christian fundamentalists, not with the majority of Australian Christians, or even, necessarily, Baptists.

Nor can Gillard’s stance be based on populism. The majority of Australians clearly support same-sex marriage. The Senate Inquiry into Marriage Equality received an unprecedented number of submissions and, despite the best efforts of conservative Christian lobbyists, 44,000 of the 75,000 submissions support same-sex marriage. Even the Australian Christian Lobby was forced to admit to their members that they were ‘comprehensively losing‘ the debate in the court of public opinion.

Gillard’s position cannot be based on some conception that marriage and religion are inextricably linked. Indeed, the secular nature of marriage in this country is illustrated by the fact that the majority of Australians (67 per cent in 2009) are married by civil celebrants.

Nor is her intransigence based on ALP policy. She is at odds with the majority Labor view on same-sex marriage.

Gillard has even recently conceded that the legalisation of same-sex marriage is inevitable – and still she remains opposed.

As far as I am aware, Gillard has articulated no clear argument for her opposition apart from a slightly robotic:

“My position flows from my strong conviction that the institution of marriage has come to have a particular meaning and standing in our culture and nation and that should continue unchanged.”

So, one has to ask – why has Obama ‘evolved’ on this issue while Gillard seems to have ‘de-evolved’?

Political commentator Paul Barry suggests that Gillard’s opposition to same-sex marriage “is not mysterious at all to those who understand the power of conservative Catholic South Australian senator Don Farrell, widely known as ‘The Pope’.”

Farrell was one of the core group of ‘faceless’ men who conspired against Rudd to install Gillard as prime miniter back in 2010. According to former ALP deputy leader, Ralph Clarke, Farrell “controls the pre-selection directly or indirectly of every MP in South Australia. If you want to get on, you get on with Don.”

In fact, according to Wikileaks, Senator Farrell had the ‘inside dope’ on Gillard’s leadership aspirations well before that fateful night in June 2010 when she rolled Rudd. A Wikileak cable suggests that Farrell told US embassy staff as early as June 2009 that Ms Gillard was gunning for Rudd’s job. That couldn’t have been ‘common knowledge’. Could it be that Farrell and Gillard were doing deals well in advance of the 2010 coup? And was a stance against gay marriage a part of that deal?

Farrell controlled the votes from South Australia and as a former leader of the Shop, Distributive and Allied Employees’ Association (SDA) he had tremendous influence over the votes of the union’s parliamentary wing. Votes controlled by Farrell were critical for Gillard to win the prime ministership in the party room. It’s not inconceivable that his support came at a price.

Gillard was never a member of the extreme right faction of the Labor party. She began her political career as part of Labor’s Socialist Left faction and later migrated to the centre. Yet now there are many, including Australian Marriage Equality national convenor, Alex Greenwich, who say that Gillard “appears to be captive of the extreme right of the Labor Party led by SDA union boss Joe de Bruyn”.

De Bruyn opposed the Rudd spill in 2010. But, when Gillard’s leadership position was challenged earlier this year, he supported Gillard. Is it possible that a commitment not to support same-sex marriage was part of some quiet back-room deal forged between Gillard, de Bruyn and Farrell?

If this is the case – and I freely admit this is mere speculation – it is likely that the ‘deal’ was based on de Bruyns personal power given that even his own union, the SDA, don’t seem to support his stance on gay marriage. Just this month, SDA Members for Equality spokesman Duncan Hart said he believes that most SDA members don’t agree with de Bruyn’s position.

“This is especially the case amongst retail workers, who are predominantly young and urban,” said Hart.

“It is farcical that our union leadership is so out of touch with members’ attitudes.”

And in supporting de Bruyn’s and Farrell’s view, Gillard has put herself at odds with the powerful Australian Workers’ Union. Prior to this year’s ALP conference, AWU leader Paul Howes described Labor’s opposition to gay marriage as “indefensible”. Even in terms of ‘placating the unions’ Gillard’s position makes no sense.

At the ALP’s National Conference in December last year, de Bruyn was not even able to hold his own right wing faction together on the issue of same-sex marriage. De Bruyn was booed and jeered by other party members as he spoke out against same-sex marriage at the conference.

Gillard’s continued opposition to same-sex marriage is contrary to the views of the majority of Australians, her own party, the majority of Australian Christians, the president of the United States, the new French president, Francois Hollande and even conservative British prime minister David Cameron. Her intransigence makes no sense in terms of her religious beliefs, her lifestyle choice or her previous passionate support for gay rights. Neither does it make political sense, given the widespread public support for legislative change.

The only conclusion I can draw is that Gillard sold out Australia’s queer community as part of a back room deal for political power. The only thing that makes sense to me is that Gillard is personally in debt to Farrell and de Bruyn and relies on their continuing support to shore up her increasingly shaky hold on the prime ministership.

How secular is a nation in which the prime minister is held captive to fundamentalist Catholic dogma? How democratic is this country when two men appear to control the prime minister’s stance on an issue which is so central to notions of justice, equality and human rights? 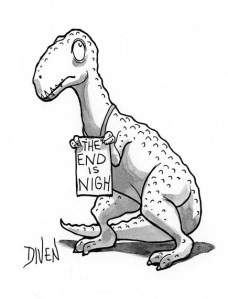 What does it say about the strength of our prime minister’s personal ethics if, in exchange for political power, she agreed to act as a ventriloquist’s dummy for religious zealots whose views represent neither her own beliefs nor those of the majority of her party?

Perhaps Gillard should consider that evolution favours those who can best adapt to changing environments. She, herself, has conceded that the political environment has changed with respect to same-sex marriage. And yet, it seems, while nimbler politicians are evolving, she has chosen to throw her lot in with dinosaurs like de Bruyn and Farrell – and we know how evolution deals with dinosaurs.

To help put pressure on the PM to change her position on same-sex marriage, please consider signing this petition, asking her to show the same kind of courageous leadership as Barack Obama.

Update 11 May 2012:  Crikey’s Jeremy Sear has now taken up this issue, asking the Canberra press gallery to start asking some of the questions raised in this post.