I ‘Resurrect’ after the Gala Dinner

I woke early on the morning after the Gala Dinner wondering how many more Atheist Conventions I had in me! The pace was gruelling, my brain was overloaded, and my poor feet were throbbing! But, another day beckoned, so, zombie-like, I raised my arms and shuffled back into the fray.

The Hilton Hotel and the Melbourne Convention and Exhibition Centre are connected at the first floor level.  Hilton guests need only go to the first floor, walk through some heavy doors, through a large reception area, and down an escalator and they’re in the main exhibition area of the MCEC.  Riding down the escalators in the morning to the sight of 4,000 massed atheists was really something to make my secular heart sing. 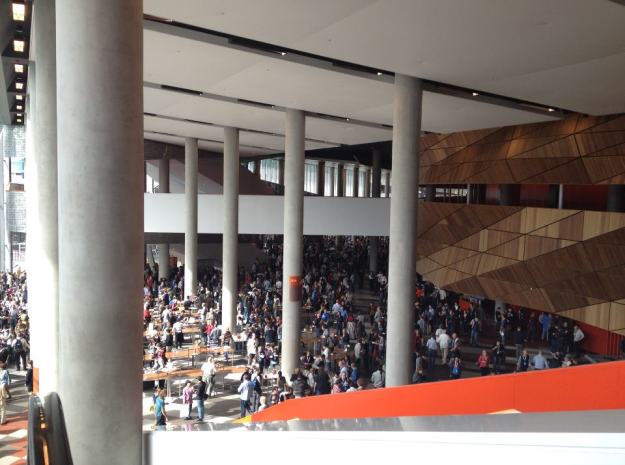 Having attended the Convention twice now, I can verify that the people attending are mostly not the kind to whom $400 and an interstate (or international) airfare is a mere bagatelle. These are ordinary working folk, students and retirees who have made a real financial sacrifice to stand up and be counted.

Eugenie Scott was the first speaker of the day. A gracious, elegant woman,  Eugenie is, nevertheless, a fierce campaigner against the teaching of creationism and intelligent design in schools.  MC, Laurence Leung, noted that she has been dubbed ‘Darwin’s golden retriever’ (an allusion to Darwin’s friend and contemporary, Thomas Huxley, who called himself ‘Darwin’s bulldog’).

Eugenie, (I’m going to refer to her by her first name, ‘Scott’ just doesn’t sound right somehow), began by noting that there are different kinds of creation ‘theories’. Broadly speaking there is Young Earth Creationism (YEC), Old Earth Creationism (OEC) and Intelligent Design.

YEC posits that God created the earth and  the life upon it more or less in its present form 6,000-10,000 years ago, within the time-frame given in the Old Testament.

OEC accepts that the earth is far older than 10,000 years and teaches that God created life, sequentially, through time (thereby explaining the distribution of plants and animals in the fossil record.)

While YEC and OEC may accept some forms of micro-evolution within ‘kinds’, they do not accept that one species can evolve into another.

Intelligent design accepts much of evolutionary theory including natural selection, but argues that the complexity of certain body parts and the progression from one species to another is too complex to occur ‘naturally’ and, therefore, must have required the hand of an intelligent ‘designer’.

More information on the different kinds of theories is available here:  The Creation/Evolution Continuum by Eugenie Scott.

Eugenie spoke about various interpretations of the sedimentary deposits in the Grand Canyon and nearby geological features, the Zion and Bryce Canyons.

“5,000 feet of sediment deposits in one year!” exclaimed Eugenie, pointing to the absurdity of the hypothesis.

She showed us a photo of the Coconino Sandstone which has a layer of ‘wind lain’ sediment between two layers of water-lain sediment.

This tends to bugger up the young earth creationists theory that the Grand Canyon was created in ‘one go’ within the space of a year by Noah’s flood.

No problem! The YEC-ers simply argue that geologists are mistaken and the wind-lain strata of the Coconino is actually water lain. It must be – otherwise they’re wrong and that’s simply not possible!

There’s a flaw in their theory, however. There are footprints in the middle strata of the Coconino Sandstone. This is entirely consistent with it being wind-lain, but rather bizarre if the footprints were laid and fossilized under water!  Nevertheless, a YEC scientist did some experiments with salamanders (back in the late 70s) and determined that footprints could, indeed, be laid underwater.

There’s just one small glitch – the trackways in the Coconino show the prints of apparently fast-moving insects such as spiders and scorpions.  (Try putting a spider in an aquarium and see how you go getting it to leave tracks in the sand!)

If you’re interested in this, there’s an excellent article here:  Coconino Sandstone (startling evidence for Noah’s Flood) by Gary Neyman (Answers in Creation).

“They only seek out data that confirms their views,” she says.

Why this aversion to evolution?

If there was no ‘original sin’, there was no need for Jesus to be sacrificed on the cross (at least in the minds of creationists).

But, more broadly, Eugenie believes intelligent design is based upon an animosity towards philosophical materialism. If science does not support a Biblical world-view, then we have to change how science is done!

Eugenie spoke of the Discovery Institute’s ‘culture warriors’ and its Center for the Renewal of Science and Culture, headed by Stephen Myer (author of the Wedge Strategy).  This, said Eugenie, is a “radical assault on material culture and the science behind it.”

Indeed it is. The Wedge Strategy document states that:

“[The] Discovery Institute’s Center for the Renewal of Science and Culture seeks nothing less than the overthrow of materialism and its cultural legacies. Bringing together leading scholars from the natural sciences and those from the humanities and social sciences, the Center explores how new developments in biology, physics and cognitive science raise serious doubts about scientific materialism and have re-opened the case for a broadly theistic understanding of nature. The Center awards fellowships for original research, holds conferences, and briefs policymakers about the opportunities for life after materialism.”

But, Eugenie was at pains to point out that not all materialists are atheists. There are two kinds of materialism, she said: methodological and philosophical. They are not the same, although ID proponents like to conflate them.

Science is methodologically materialistic. It makes no claims about the supernatural – it neither believes nor disbelieves. Science is concerned with describing and explaining nature.  Therefore, its focus is on that which is natural rather than supernatural. The supernatural is not something about which scientific assumptions can be made. As  ‘there is no way to contact, detect, or otherwise empirically observe the supernatural’ it is outside the purview of science [see Rational Wiki for more detailed explanations].

Philosophical materialism, on the other hand, does make the claim that the natural, the material, is all there is.

Contrary to what ID proponents would have us believe, Eugenie explained, not all methodological materialists are philosophical materialists. Many are, but not all. There are certainly many mainstream scientists who respect the materialism of science but, nevertheless, hold a philosophical belief in a supernatural intelligence.

Eugenie mentioned Phillip Johnson’s manifesto against scientific materialism, The Wedge of Truth.  Johnson appears to believe that our materialistic society rests upon a pillar of scientific materialism. That pillar is embedded in the foundation of evolutionary theory. This gives rise to the hypothesis that, if evolutionary theory can be destroyed, the whole structure will topple; “…  the walls of naturalism will fall” and  the Christian gospel will provide the “new foundation for thinking – not just about science and religion but about everything that gives human life hope and meaning.”

There is a belief that we have to open up science to allow for miracles, says Eugenie. (And I am moved to say, “God forbid!”)

Eugenie stressed that creationism and intelligent design are not about science – they are ideological and political. The push to ‘teach the controversy’ about evolution in schools has nothing to do with science, but is a part of America’s on-going culture wars.

She’s right! Lead stories detail the passing of an anti-evolution “monkey bill” in Tennessee which allows (compels?) science teachers to ‘teach the controversy’. Eugenie has, of course, responded, warning that:

“Telling students that evolution and climate change are scientifically controversial is miseducating them. Good science teachers know that. But the Tennessee legislature has now made it significantly harder to ensure that science is taught responsibly in the state’s public schools.”

While conceding that Miller suggests (in a separate part of the book) that God may have intervened at a quantum level, she says that his initial argument “lays waste to creationism”.

She said that she would not reject Miller because of his concession to intervention.

“I take allies wherever I can get them!”

Eugenie concluded by stressing once again that intelligent design has no basis in science.

“It is a political position – not a scientific one.”