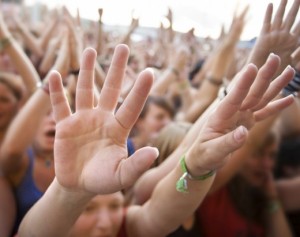 I’ve been invited to speak to an audience of 13-25 year olds on Joy 94.9 FM’s youth program, Generation Next, tonight.

Joy is an independent station serving Melbourne’s diverse lesbian and gay communities. It has an audience of over 200,000 people in Melbourne and more online.

The focus of the interview will be the STFU article I wrote in response to the Victorian’s bishops’ shameful pastoral letter opposing same-sex marriage. But, we’ll also be speaking about how the GLBTIQ community are not the only targets of narrow-minded religious bureaucrats and fundamentalists.

But, as I thought about what message I really wanted to leave with Melbourne’s GLBTIQ youth, it was the simple message, “Get up and DO something” that came to mind.

It’s so easy to think that, as an individual, you can’t do anything to change the world.  You feel powerless. If you’re in a minority group, I can imagine that you feel even more powerless. It’s very easy to think, “Well, nothing I do is going to make any difference, so I’ll just do nothing.”

The thing is, we’re not powerless. And, today, young people have a resource that people of my generation never had – the internet. But they’re not yet using it to full effect.

In the 1960s, even without the benefit of the internet, young people managed to change the culture of the world. They marched against the Vietnam war. They agitated for civil rights for African Americans and indigenous Australians. They campaigned for women’s rights. The environmental movement started in the 1960s.  These movements inspired the gay liberation movement which has seen a huge change in attitudes towards homosexuality – although we still have a long way to go.

Without the aid of the internet to spread the word, they used other instruments of popular culture.  Pop groups and folk groups sang about things that mattered to them – not just lame songs about ‘lerve’. Young people began to produce magazines and newspapers.  Art, movies, even comics carried the message that the world had to change.  Kids got out and marched on the streets. They staged ‘sit ins’ at universities.  They changed the way people thought about things, and in doing this, they changed the world.

The world that most of the listeners of Joy’s Generation Next were born into is far different to that of their grandparents, and that’s because the young people of the 60s got up and DID something.

Of course, the world still isn’t perfect. We have a long way to go. But young people can make a difference, just as they did way back then.

It’s true, an individual has little power. But lots of individuals working together can have enormous power.  That’s where the internet comes in.

How easy is it to form networks of friends on Facebook, Google, Twitter or other social networking sites – friends who share the same interests as you?  Once you have a network, you’re no longer operating as an individual. You have the potential to reach thousands with your message.

Remember, you don’t need thousands of friends. Think of the internet as a pond. You throw a pebble into it and a ripple moves out to the limits of your friend network. But then they pass the word and the ripple starts extending until eventually, it spreads right across the pond.

With a potential influence on thousands, you can change the result of a newspaper poll. You can have a politician bombarded with emails. You can protest effectively against almost anything.

In Queensland, last year, a billboard company took down a safe-sex ad, targeted at the gay community, because it received just 220 complaints.  That’s how sensitive companies can be to public opinion.

When the models who posed for that Rip & Roll ad mounted a social networking campaign in protest , word spread rapidly. Soon, there were over 25,000 people signed up to the Rip & Roll  Facebook support group and the company quickly reversed its decision.

In Brisbane, an anti-vaccination campaigner was booked to speak at the Woodford Folk Festival. A Facebook group which opposes her dangerous message sent messages of protest to the organising committee, festival sponsors and the government. They sent out media releases and got themselves into the newspapers and on to radio and television to explain why this woman shouldn’t be able to spread her dangerous misinformation and endanger the lives of children. Under enormous pressure, the festival organisers relented and  agreed to have a medical doctor and a professor of immunology join her on the stage to counter her anti-vaccination message.  This was all achieved by a small group of Facebook friends, working together.

But social networking can work on an even bigger scale. Last year in Egypt, 85,000 people signed up to a Facebook group planning a demonstration against that  country’s oppressive dictatorship. As a result of that campaign, Egypt’s government fell and the dictator, Hosni Mubarek was sent into exile. Individuals working together on Facebook changed the direction of politics in the Middle-East. Soon protests began in other countries, and other dictators began to fall.

Even as an individual, there’s so much you can do. Write an email to a politician about why you want a policy changed. Tell them your story to help them understand how their policies effect real people.

Sign a petition. How long does that take? A minute?

Last year I was invited to sign a petition which called on the government of Uganda not to proceed with an anti-homosexual bill which included the death penalty for gay people caught in homosexual acts.

I was horrified, but I thought, “What good is signing a petition going to do. It’s not going to change anything!”

But 1,685,515 people just like me signed that petition. In addition,  tens of thousands of people wrote to their governments asking them to put political pressure on Uganda.  Ultimately, the bill was shelved. We did that.  People power did that.

So, tonight, my message to the listeners of Joy’s Next Generation will be, “Don’t just sit there, get up and DO something … anything! You have way more power than you think!”

Find something you’re passionate about and become an activist for it. It doesn’t have to be gay rights. Just make sure whatever you get involved in is a force for good.

Start talking back to politicians. They work for you.

Do what you’re good at. Don’t underestimate the power of popular culture. Write songs, start a blog or an online newspaper. Draw cartoons and put them up on your own blog if no-one else will publish them.  Make movies and put them on Youtube. Make art, design a logo, help design a website.

And if you’re not an artist, use whatever skills you have. Groups always need organisers, webmasters, IT experts, treasurers, people to help raise money, strategists, and just plain foot-soldiers.  If there’s a politician who supports the things you believe in, offer to hand out campaign flyers for them at the next election. What does it take? A morning’s work? And just a few extra votes can change an election result.

Join a group – any group!  Just adding your name to something you believe in means that you can be counted.  Politicians respond to numbers.  If a group can say, “We have 2000 (or 20,000 members)” that adds to their impact. And all you had to do was add your name!

The world needs changing and while we old hippies are still working hard, we need the next generation to join in.

Listen to Chrys on Next Generation tonight, Monday, 9 April on Joy 94.9 FM Generation Next 7pm to 8pm  with Emma O’Connor.

Options for listening live online or from your i-phone are available here.  A podcast of the latest program usually goes up within 24 hours and can be found here.

3 thoughts on “Activism: Don’t just sit there, get up and DO something!”