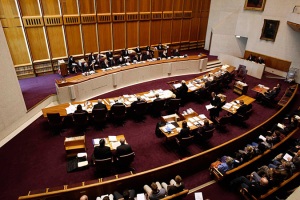 Sitting in the High Court of Australia, one could not help but be impressed by the constellation of intellectual power both on and before the bench.  The analogy that came to mind is that the Justices, the barristers and the solicitors-general are the intellectual equivalent of Olympic athletes.  So, it with no thought of disparaging the stellar intellects and talents of the representatives for the defence, that I observe the star performer was undoubtedly,  Ron Williams’ barrister, Bret Walker SC.

Walker’s presentation was authoritative, self-assured, eloquent and accessible. There seemed to be an easy rapport between Walker and the High Court Justices. This is not to suggest any form of favouritism on their part.  I would simply remark that the  tension sometimes evident between the  bench and representatives for the defence, was entirely absent when Walker spoke.  Of course he was questioned and challenged by the Justices, but his calm manner and an underlying gentle humour seemed to put them at ease.

Having witnessed Walker in action on the first day of the hearing, we awaited his reply to the defendants’ arguments with great anticipation. In the course of the three day hearing, it had become evident that the matter before the court had wide and (if the defence was to be believed) potentially devastating consequences for the exercise of power by the incumbent government.

Everyone, including the legal representatives and Justices, seemed astonished at how the case turned, on the second day, to become a matter of such far-reaching historical importance that the chaplaincy issue almost seemed to fade into the background.   No longer did it seem to be the raison d’etre of the case.  Now, it seemed (to me at least), to be simply a tool which might be used to bring a power hungry government to heel.

Walker began his address by speaking briefly to the subject of ‘benefits to students’.  The contention by the defence is that the NSCP fits the description of conferring a ‘benefit’ to students and, therefore, the expenditure is authorised by the Constitution and does not require legislation through an act of parliament.  Walker disposed of Scripture Union’s argument that the word ‘benefits’ should be defined broadly by pointing out their legal reasoning had ‘many steps missing’.  The sense was of a Professor of Law marking a red line through an undergraduate’s assignment.

Walker moved on quickly to attack SUQ’s conention that it is a ‘trading corporation’.  This was important because the Commonwealth and SUQ claimed no legislation was necessary to support expenditure for the National School Chaplaincy program, because the Commonwealth is permitted (without legislation) to enter into contracts with ‘trading corporations’.

Walker conceded that the Constitution does not supply ‘tight definitional parameters’ in this regard,  but, he insisted, “That does not mean that there does not have to be some attempt at definition …”.   To define a ‘trading company’ as one which (like SUQ) happens to trade from time to time – as an activity incidental to its main purpose – was, he insisted, to misinterpret its meaning. It cannot, surely, suffice, said Walker for a corporation to say that from time to time something is done, for example, selling of surplus assets or getting rid of second-hand bibles and say, “Well, that is trade”.

Next, Walker addressed,”… the critical matter in terms of whether we [i.e. Williams’ case] can succeed or not.”

Walker argued on ‘Day One’ that no valid appropriation had been made for expenditure on the NSCP.  Since then the focus of the court had shifted significantly.  What was now central to the arguments was whether the government had acted properly in failing to pass legislation for the expenditure.

Walker considered (even, perhaps conceded) the possibility that the court may well find that the appropriation was valid and that the NSCP does not constitute a religious test for ‘officers under the Commonwealth’.  (This second contention was given no support by any of the states and, I’m sorry to say, appears – to me at least –  to be ‘dead in the water’.)

Given that the defence may succeed on both these counts, said Walker, “… the question still remains whether the funding agreement under which the Commonwealth provides funds for the chaplaincy at my client’s children’s school is lawful in the sense of being made pursuant to legal authority.”

In other words, by Day Three, the issue of primary concern was that, even if the the NSCP appropriation was valid,  appropriation is not legislation.  Just because something is buried included in a Parliamentary Budget Statement and attached to an appropriation which  passes  successfully through the lower house, this does not mean the expenditure has been ‘approved’.

As I understand it, what was argued at the hearing, and what seemed to be widely accepted by the bench, is that an appropriation  only confirms that money is available from Consolidated Revenue to meet a particular purpose . It should not be construed as providing approval for the expenditure of those funds.

Importantly, where an expenditure falls outside of the category of the ‘nationhood’ powers of the Commonwealth (i.e. matters of national emergency, or matters peculiar to the administration of the Commonwealth) or where it cannot be construed as a routine and ongoing item of expenditure necessary for the administration of the Commonwealth (e.g. the purchase of stationery), it requires legislation (i.e. the passing of a legislative act).  The NSCP does not appear to fit either of the categories which would exclude the necessity for parliamentary approval through legislation.

Any claim that chaplaincy is, of necessity, a national program, said Walker, is  insupportable.  There is no ‘observable incapacity of the States’ to run such a program themselves.

In Walker’s opinion, the failure to pass legislation for expenditure for the NSCP simply cannot be circumvented by claiming it is a matter of ‘national importance’ which the States do not have the capacity to administer.

Throughout the case, the Commonwealth and SUQ, like oracles of doom,  attempted to warn the judges of the ‘terrible consequences’ that would ensue if there was a finding in favour of Mr Williams. Portentious rabbits prophesying all kinds of apocalyptic consequences were frantically pulled out of the defendants’ collective hats.  The suggestion that a win for Williams would deprive thousands of poor autistic children from participating in Commonwealth funded programs, was one of the more cynical arguments.

During the case, there was some amusement caused by the suggestion that a win for Williams would require legislation to enable the purchase of ‘HB pencils’.  The implication was that a precedent would be set, requiring legislation for everything and anything on which the Commonwealth spends money.  This, the defence warned ominously, would ‘hobble the nation’.

But, Walker explained patiently that the ‘nationhood’ powers conferred on the executive by Section 61 of the Constitution ensured the nation would not be ‘hobbled’ by a finding for Williams. In short, the NSCP is not a matter of national importance, nor is it a program that could only be administered by the Commonwealth – the existence of school chaplaincy in Queensland well before Commonwealth funding proves the point.  So, a ruling that programs like the NSCP require legislation would not confer any negative impact upon matters which are legitimately the business of the Commonwealth.

In fact, one of the High Court Justices, himself, pointed out:

“.. the Crown has a power independent of statute to make such contracts for the public service as are incidental to the ordinary and well-recognized functions of Government”.

Just so, the argument that a finding for Williams would require legislation for stationery supplies, was neatly exposed as specious.

Quietly settling any concerns about the wider ramifications of a finding for Williams, Walker reminded the Justices there were already useful precedents in case law which might provide the bench with guidance in respect to those areas in which executive power exists under section 61, without the need for enabling legislation.  Better definition was clearly needed, but the means to make such definition existed.

The executive, said Walker, was certainly authorised to make contracts on behalf of the Commonwealth as might from time to time be necessary in the course of its administration; but one should not pretend that the National School Chaplaincy Program falls within that category.  Nevertheless, the executive might, legitimately, have investigated whether such a program was worthwhile before spending $450 million of taxpayers’ money on it. This would not have required enabling legislation.

Providing a ‘road map’ of how similar programs might be managed, Walker said that, having tested the need for and potential efficacy of such a program and determined that it was desirable, it might then have entered into agreement with the States to provide funding to a third party as part of the terms.  But this is not what was done in the case of the NSCP.  The suggestion seemed to be that what is at issue is not that such programs might be prohibited (leaving autistic children throughout the nation, bereft!), but only that a somewhat different, and co-operative approach may be required for their implementation.

One of the Justices asked if policy ‘experiments’ could be treated in the same way as ‘inquiries’ into new policies.

“If it was a sufficiently humdrum or mundane experiment that did not really attract the description “policy”,” said Walker, then it might fall into this category. “ … but if it were truly a policy departure, a novel program, then it would not evade the requirement for enabling legislation to call it a pilot, to call it a trial or to call it an experiment.  Insofar as it involves activities by the Commonwealth, including contracting or spending, it would need the enabling legislation.”

By way of explanation, Walker proposed an analogy, “… the replacement lifeboat on the battleship is one thing, the new battleship is another thing altogether” – the one legitimately finding approval in an appropriation, the other requiring an act of Parliament.

“When it comes to the exercise of making a contract along the lines of the NSCP”,  said Walker, it is necessary for the Executive to be authorised by law. This “can no longer be done in this country simply by pointing to a large lump of money in the Appropriation Act and saying it is within an outcome or activity.”

The defence’s attempt to claim legitimacy for the NSCP under the Commonwealth’s power to make grants was also called out as a semantic ruse. “If you call it a grant, you do not make it any better, it is still spending,” said Walker.

“In our submission, it would be the height of cynicism and the evasion of Parliamentary control of the Executive simply to say, “Oh, well, executives give money away, spend money, therefore, all spending of money is something an executive may do without legislation.” That, in our submission, is chop logic of the worst kind.”

The argument, it seemed, kept coming back to the same point.  Expenditure for the NSCP should have been put to the parliament for approval.  No matter which way the defence tried to twist and turn, make semantic arguments, or churn out dire predictions of apocalyptic consequences, Walker masterfully called them out.  It came down to this:  The appropriation of the funds – whether valid or not – was not sufficient to make the NSCP ‘legal’ in a Constitutional sense.

So, said Justice Crennan, seeking clarification, “Is the end point this:  spending on, or making contracts in respect of the activity or enterprise of chaplaincy in schools in Queensland does not fall within the ordinary and well-recognised functions of the Commonwealth Government?”

With that, Walker concluded his address to the bench.

It may now be three to six months before the High Court hands down its decision.

Posts in this High Court Challenge Series (in order):