A recent Facebook post referred to overweight people as ‘fat lazy slobs’.  It wasn’t directed at me, personally, but I admit to taking offence.  As a larger than average person I was outraged.

I thought, “You know nothing about me, and yet you think it’s perfectly acceptable to make judgments about me and my lifestyle based on my size.”

As it happens, I am not lazy, I am definitely not a slob and I don’t spend my days lying on the couch watching Days of Our Lives while whacking back litres of Coke and chowing down on chips and chocolate.

There is a whole life story and medical history that lies behind my weight which is no-one’s business but mine and I certainly wasn’t about to share it with some stranger on Facebook.  But it got me thinking – how often do we judge (or worse, condemn)  people on face value without really considering that everyone has a ‘back story’?  Indeed, those back stories can often turn our first impressions upside down, revealing the danger of judging people based on very little knowledge.  The truth is that people are very rarely exactly as they seem. 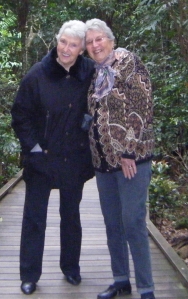 My mother met her best friend, Joan, on their first day at primary school.  Today, they are eighty-six, still friends, and they still walk hand in hand down the street as they did as teenagers during the war.

We love her dearly, but Joan can appear rather grand.  She lives in an expensive, art-filled, inner-city apartment, having returned to Australia after many years living on Central Park, New York as the wife of an eminent university professor.  She speaks casually of world travels, United Nations luncheons and fundraisers at the Museum of Modern Art.

Recently, I mentioned that I was looking for a rug for my study.

“Well, that kind of thing …” I said vaguely (thinking I might pick up something at a Rugs a Million sale for around $150).

“Well do take care, dear” she warned, “some of the orientals nowadays are [shock!] machine made!”

I had to curb my mirth as I told her I very much doubted I’d be able to purchase a hand made oriental rug on my meager budget.

My point here, is that anyone speaking casually to Joan may dismiss her as a wealthy, elderly socialite who has never known anything but luxury.  They would be wrong.  Joan’s husband was an eminent anthropologist and she was a vital contributor to his fieldwork amongst the Walpiri people of Central Australia and the Enga tribe of Papua New Guinea.  She knows what it is to ‘rough it’.  She has patched up Aborigines wounded by axe fights, she has grubbed for yams in New Guinea, she has slept in a yurt in Kazakhstan and lived in a village in Andalucia.  She might appear to be a ‘lady who lunches’, but she is so, so much more.

Many years ago, I was a member of a social club which met once a month for lunch.  It was an eclectic bunch and one never quite knew who would turn up, but it made for some interesting conversations.  One day we were joined by a very large, very scary looking bikie (biker for my American friends).  He strode in, wearing the obligatory leather vest with his club ‘colours’ emblazoned on the back, an impressive “Vietnam Vet” belt buckle, long grey hair tied in a pony tail and an intimidating face full of whiskers.  Despite first appearances he turned out to be a gentle, articulate and highly intelligent man with an incredible back story.

Zev was an Israeli, seconded to the Australian Army during the Vietnam war, suffering horrific experiences including being ordered to fire on what turned out to be their own troops.  After Vietnam, Zev settled in Australia, but, like many vets, struggled with post traumatic stress syndrome.  Zev, it turned out,  was also a keen Bible scholar and, as an Israeli, spoke and read Hebrew.  He grinned as he told us how much he enjoyed the occasional visits from Jehovah’s Witnesses.

But when I open the door and they actually see the big, ugly, hairy bikie you can see I make them a bit nervous.”

They’re so used to being turned away, I reckon they think they’re safe, but I say, “Oh hello!  Oh? You want to talk about the Bible?  How fascinating!  Do come in!  Sit down!  Make yourself at home!”

And then they start quoting from the Bible, and I go and get my big Bible off the shelf and I say, “Your Bible says that?  Really?  That’s strange because that’s not what my Bible says!” and I begin to read to them, chapter and verse …. in Hebrew.”

“As I see their eyes glazing over, I say, “Oh, you don’t speak Hebrew?  How very strange?  I would have thought if you really wanted to understand the Bible you would at least have learned the language it was written in!”

“By that time, they’re inching forward in their chairs muttering about having to get going and I say, “Oh don’t go!  Please stay!  We’re having such an interesting conversation!”

How easy it would be to dismiss a big, ugly, hairy bikie as one of society’s rejects.  Why is it a surprise to find a Hebrew speaking, Bible literate, intellectual war-hero hiding behind all those whiskers?

Zev now works tirelessly as a lobbyist for better conditions for Vietnam Vets.  Next time you see a bikie and are tempted to think of the stereotypical drugs, alcohol and bikie wars, remember that everyone has a back story and you don’t know theirs.

Finally, a story from very close to home.  Recently we hired a handyman to do some gardening and landscaping chores around the house.  A very tall, self-effacing, quietly spoken chap, Gavin* worked so diligently and efficiently and for such a fair price we kept finding stuff for him to do.  Over several cups of coffee we found that Gavin, too, was much more than he seemed.  How easy to underestimate someone who does gardening and odd-jobs for a living.  How easy to think they’re ‘just a normal bloke’, hardworking, but with a rather pedestrian life-style and outlook.  So, we were mildly surprised to hear our willing worker say quietly, “Oh, by the way, I’m  in the local paper this week – but you probably won’t recognize me.”

And so began a story which revealed so much more about the value of friendship and love and laughter than we could ever have imagined would come from our lanky, rather dour, handyman.

Some years ago, Gavin’s nephew’s wife had begun to earn some much needed money by making teddy-bears.  Having something of an entrepreneurial mind and a kind heart, Gavin decided on a scheme to promote the business.  He invested thousands of dollars of his own money into the idea and, when it was realized, he was keen to show it off to a friend.  Arriving at his friend’s house, he was told he was out, so he revealed all to the friend’s wife who said, “Brilliant!  He’ll be home soon.  Let’s surprise him!  You go and get set up in the bedroom and when he comes home you can come out and show him your idea.”

So, at length, the friend comes home, the wife stays out of sight, and Gavin steps out into the living room, transformed into a 6’8” bear with a wooden leg and an eye patch.  His poor friend was so discombobulated by the sight of this beast in his living room his reflexes took over and he delivered a thunking right hook to the bear’s face! 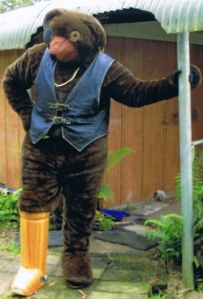 “Of course,” says Gavin, laconically, “the head is so heavily padded it didn’t hurt a bit, and I reckon I could have taken him, even with the bear suit on, but of course, I didn’t.”

The story of Gavin’s bear being decked by his mate became one of those iconic stories that are retold and laughed about for years.  These are the moments that add depth and character to our friendships.

But time moves on and, eventually, Gavin moved to Queensland, taking up work as a handyman and gardener while he cared for his elderly mother.  When he heard that his mate, back in Adelaide, had terminal cancer, he was struck by the question we are all faced with at some stage in our lives, “What can I do to make a difference?”

The first thing he did was jump on a plane and go to see him.  During his visits they talked about Queensland and the little town where we live and his mate said he’d love to see it – but, of course, Gavin knew that simply wasn’t going to happen.  Gavin returned home, glad he had visited, but still convinced there must be something more he could do.

And so he conceived of the idea that, if his mate couldn’t come to visit him, he’d send him some photos of our village.  And then, remembering their history with the bear, Gavin decided on a plan.  Co-opting the support of some locals as guides and photographers, Gavin morphed into Secret Agent 008 ¾ Super Sleuth Incognito – the 6’ 8” bear – and set out on a tour of the village.  He visited the pharmacy, the library, the coffee shop, the post office, the park, the pub and the supermarket – meeting the locals and posing for photos all the while.  And then, when he was finished, he sent the photos off to his mate.

They were met with great hilarity and, as each new visitor came – undoubtedly with their own concerns about what to say to a dying man – the photos came out, broke the ice and eased the conversation.  The photos provided a catalyst for laughter and conversation and the effort involved in taking them spoke more about the depth of the friendship than two Aussie blokes could express in words.  A week or so after the photos arrived, a mutual friend rang Gavin and said simply, “Mate, you did a good thing.”

And so, we have a fat lady who is emphatically not a lazy slob, a wealthy matron who has roughed it in the deserts of Australia and the jungles of New Guinea, a bikie who is a Hebrew-speaking Bible scholar and a gardener who also happens to be a 6’8” bear.  None of us, I’d venture to say, is exactly as we seem.

Wouldn’t it be wise – indeed rational –  if we reserved our judgments, condemnations and dismissals of people based on first impressions and accepted that looks really can be deceiving.  Surely we need to look no further than ourselves to know that if there is a ‘secret life of us’ there is also, very probably, a secret life behind  just about everyone we meet.

* Not his real name.  ‘Gavin’ prefers the bear to ‘speak’ for himself and prefers that his ‘owner’ remains anonymous.  More photos of Secret Agent 008 3/4 Super Sleuth Incognito can be seen here.

Gladly reminds me that we happen to know a rather diminutive and very scholarly looking bookshop proprietor whose ‘back story’ includes working as an exotic dancer and cycling 20,000km across Australia for charity. His partner, currently playing the role of a slightly harrassed and terminally tired mother of a one-year-old happens to have an incredibly impressive profile on IMDB as a film editor, with credits including Baz Luhrman’s Moulin Rouge and Nim’s Island (starring Jodie Foster). They’d both be very grateful if you’d buy some books from them so that, 15 years from now when they’re luxuriating on their 60′ yacht in the French Riviera they can say, “Don’t hate us because we’re rich – we used to be impoverished bookstore owners once, you know!”

4 thoughts on “The Secret Life of Us”