This is an article I wrote some weeks ago in response to another outrageous outburst from Jim Wallace of the Australian Christian Lobby.  It got caught up in a queue for publication elsewhere and I subsequently used parts of it to respond to Mr Wallace on Leslie Cannold’s recent article on “Christian Values” on Online Opinion.  I thought it was timely given Mr Wallace’s attack on homosexuals and Muslims today to publish the whole article here.

Update 5 May 2011: Since Wallace’s attack on gay Australians, Victorian MP Geoff Shaw has also revealed the bigotry and extremism of Christian fundamentalism by equating the gay rights with pedophilia and child abuse.  Shaw is a member of the Peninsular City Church (Pentecostal) at Frankston which runs and promotes the Alpha Course which includes significant anti-gay propaganda.  If you read the last link you will see that Shaw’s views mesh exactly with those of the Alpha course teachings.

Around 26AD, so legend has it, a nomadic Jewish preacher defied Jewish law by laying his hand upon a leper. With this simple act, he set an important example of how compassion should override religious tradition, prejudice, fear and self-interest.  I hear a whole religion was built upon the teachings of that nomadic preacher. Sadly, it seems, its adherents remember little of the message he tried to impart. In fact, the Christian church has a very poor record of emulating the man they claim to worship.

Throughout history, those who dared to disagree with the devotees of Jesus of Nazareth have been variously boiled in oil, drowned, dismembered, raped with objects, mutilated, burned, roasted alive, stretched on a rack, massacred with swords and, later, with guns and cannon-fire. The church has never been a great supporter of human rights or social diversity.

In the nineteenth century, when women began agitating for equality and the right to vote, conservative Christians fought them tooth and nail, claiming that women’s subjection to men was founded in ‘natural law’ as handed down by God. Not surprisingly, they quoted Biblical chapter and verse to defend their position.

“From the inauguration of the movement for woman’s emancipation the Bible has been used to hold her in the ‘divinely ordained sphere’ prescribed in the Old and New Testaments.

The canon and civil law; church and state; priests and legislators; all political parties and religious denominations have alike taught that woman was made after man, of man, and for man, an inferior being, subject to man.”

While Christians make much of William Wilberforce’s role in ending slavery, less is said about the conservative Christian defence of trading in human misery. In 1823, for example, Richard Furman, a slave holder and leader of the South Carolina Baptist Convention, advised South Carolina’s governor that, “The right of holding slaves is clearly established by the Holy Scriptures, both by precept and example.”

This view was so strongly held that, in 1845, those firmly convinced that slavery was God-ordained formed a separatist group – the Southern Baptist Convention – which survives to this day.  Had the Southern Baptists held the political sway they now hold in the US government, African-Americans may still be totin’ that barge and liftin’ that bail.

In the 1960s, when African-Americans began to fight against their historical oppression and demanded civil rights and an end to segregation, where was the conservative arm of the Christian church? Fighting them every inch of the way.

But surely, not! After all, Martin Luther King was not only a committed Christian but a pastor. So, what was King’s view on the support he received from the church? In 1963, in his “Letter from a Birmingham Jail”, King wrote:

“I have traveled the length and breadth of Alabama, Mississippi and all the other southern states. On sweltering summer days and crisp autumn mornings I have looked at the South’s beautiful churches with their lofty spires pointing heavenward. I have beheld the impressive outlines of her massive religious education buildings. Over and over I have found myself asking: “What kind of people worship here? Who is their God? Where were their voices when the lips of Governor Barnett dripped with words of interposition and nullification? Where were they when Governor Wallace gave a clarion call for defiance and hatred? Where were their voices of support when bruised and weary Negro men and women decided to rise from the dark dungeons of complacency to the bright hills of creative protest?  Yes, these questions are still in my mind. In deep disappointment I have wept over the laxity of the church.”

In Arkansas, a statement signed by eighty ministers explained the Church’s view on integration:

“This statement is not made with any enmity or hatred in our hearts for the Negro race. We have an abiding love for all people . . . [But] [w]e believe that the best interests of all races are served by segregation …We resent the implication by certain liberal ministers that it is un-Christian to oppose integration. We believe that integration is contrary to the will of God … is based on a false theory of the ‘universal fatherhood of God and the universal brotherhood of man.’ We believe that integration is not only un-Christian, but that it violates all sound sociological principles and is not supported by Scripture or by biological facts.”

Wow!  ‘Contrary to the will of God’, ‘un-Christian’, ‘not supported by Scripture or biological facts’.  Doesn’t this all sound eerily familiar?

In February 2011, Jim Wallace of the Australian Christian Lobby defended the right of religious schools to expel gay students for no other reason except for being gay.  He said he had no qualms about the law and that a church school should have the right to expel any openly gay child.  What an interesting distinction is made here; and how curiously reminiscent of segregation.  “Religious schools should be segregated on the basis of sexual orientation, but we might tolerate you if you can ‘pass as straight’.”

Jim, of course, realizes his stance on this might seem a little … well …  un-Christlike, so he quickly adds a proviso:

“But I would expect any church that found itself in that situation to do that in the most loving way that it could for the child and to reduce absolutely any negative affects … I think it’s a loving response.”

Personally, I’m struggling to understand how you can expel a student, just for being who they are, in a ‘loving’ way;  but then, the religious bigots who opposed racial desegregation also professed their ‘abiding love’ for the Negro people (“But please, just keep them out of our schools and churches.”). 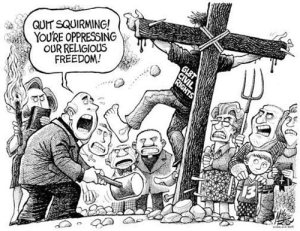 Consider this potted history of conservative Christianity’s record on diversity, human dignity, freedom and tolerance as you read Greens are attacking religious freedom, Jim Wallace’s latest tirade against the ‘homosexual lobby’, published in last week’s Australian. Be careful! Your jaw may shatter as it hits the ground in astonishment at Wallace’s revelation that Christians are being oppressed by homosexuals.

According to Wallace, it is not Christians who seek to inhibit diversity and, through legislation, force all Australians to live in accordance with a particular set of moral values, but homosexuals.  It is an argument of such arrogant audacity and heartless hubris that it left me physically ill and shaking with rage.  It reminded me of a particular quote from another vocal supporter of Christian doctrine:

“If, with the help of his Marxist creed, the Jew is victorious over the other peoples of the world, his crown will be the funeral wreath of humanity and this planet will, as it did thousands of years ago, move through the ether devoid of men.

Eternal Nature inexorably avenges the infringement of her commands.

Hence today I believe that I am acting in accordance with the will of the Almighty Creator: by defending myself against the Jew, I am fighting for the work of the Lord.”

It is a time-honoured strategy of bullies and thugs to blame their victims and cast themselves as the oppressed.  It is ‘Religion 101’ to appeal to ‘natural law’ and the ‘will of the Almighty Creator’ in defending the indefensible.

Wallace and the Australian Christian Lobby have tried very hard to portray themselves as religious moderates.  Wallace protests that the ACL is not seeking an Australian theocracy. No! They don’t want a theocracy, they just want laws based on Christian doctrine or, if this can’t be achieved, exemptions to allow Christians to practice the prejudice and bigotry that decent Australians reject.

I thank Mr Wallace for his opinion piece in the The Australian. I hope it will be widely read. For, within this hateful, petty, disingenuous, irrational and self-serving piece of despicable drivel is revealed the true, black and ugly heart of the Australian Christian Lobby andAustralia’s religious right.

Is it only because I don’t believe in resurrection that I am deafened by the sound of Jesus of Nazareth turning in his grave?

Personally, Jim, I think you and your ilk should be expelled from this nation, unless, of course, you can ‘pass’ as civilised human beings. And I mean that, of course, in the most loving way.

Mr Wallace has said today on Sunrise on Seven that Muslims who seek to place their religion above government are ‘extremists’.  Given this statement, it is worth referring my readers to this 2005 article from ACL watcher, Brian Baxter.

Readers who find the charge that the Australian Christian Lobby’s ultimate goal is an Australian theocracy difficult to believe may find this instructive:

Interview – David Yates, Compass Australia Co-ordinator D.Y: One of the key things that ACL likes to focus on is areas where it can have a disproportionate impact for the Gospel. So, the area of politics and government, where ACL works in, is one particular field. If you can get through government and policy makers then it can influence laws and it can have a disproportionate effect within the culture.

For a satirical view of this issue, see “Bullets do not  faze me but please don’t call me names”  by Bob Whidon.

Jane Douglas, an ex-Christian, has written a brilliant and insightful piece on Jim Wallace’s tactic (shown above, and also evident in his defence of his indefensibly offensive ANZAC day tweet) of trying to blame the victim.  I have said, above, this is a time honoured tactic of bullies and thugs.  Jane has first-hand experience with ‘bullies and thugs’ and writes, in part:

“… as someone who has close experience of the lasting effect of sexual abuse on children, I feel I need to make this statement:  I warn my kids about people like Jim Wallace in an effort to abuser-proof them. I tell them that bullies and abusers function by fooling us that it not the person who said or did something wrong who is at fault, but rather the poor sod who made an embarrassing fuss about it. I tell them that this is an evil lie.

Abusers harm us, and then slyly try to make us feel ashamed about saying we were harmed. They trick their victims into feeling bad that they spoke up rather than taking responsibility for their own abusive actions. The irony that no fuss would need to have been made had the abuser not acted inappropriately in the first place seems to evade them.It’s this sort of self-preserving manipulation that makes molested children reluctant to disclose the terrible truth of the abuser’s actions for fear of spoiling everyone’s mood and bringing the wrath of the abuser down on their heads. Not that I’m suggesting Jim Wallace is a child molester, but the game is the same. And it should never go unchallenged.”

Extracted from: jim wallace and the despicable tricks of abusers (and arrogant schmucks) by Jane Douglas, Putting her Oar In blog

16 thoughts on “Defending the Indefensible: The historical lineage of The Australian Christian Lobby’s Christian ‘values’”